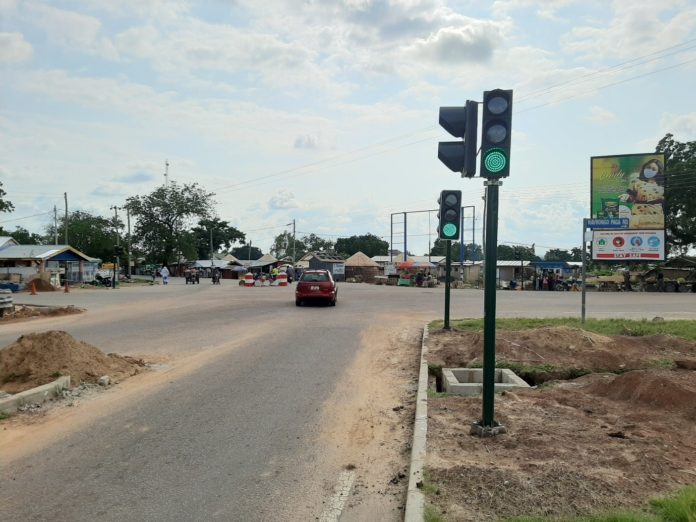 Traffic lights on nearly all major roads in the Eastern Regional capital, Koforidua, have not been functioning for months, raising concerns of road accidents and knockdowns among motorists and pedestrians.

Many of the traffic lights found on the major routes in the city are faulty and the signals have not been working for months, causing heavy gridlocks during rush hours and market days.

Ghana News Agency (GNA) investigations showed that some traffic lights at the principal intersections were not functioning at all despite electricity supply.

The lights were either all yellow in the day or did not display any signal at all.

In some areas, it was either showing red or yellow or green without changing.

The GNA further discovered that most of the traffic lights were old-fashioned, use electricity to function, as none appeared to be using solar energy.

However, officials of the Department of Urban Roads (DUR) under the Ministry of Roads and Highways in the Eastern Region, said the Department began rolling out a solar system to power traffic lights in 2014.

The initiative was expected to serve as a buffer to power outages and ensure the continuous functioning of the lights to control road traffic jams and accidents in the city.

Speaking to the GNA, Mr Ebenezer Kam, Maintenance Engineer, Department of Urban Roads, said there were 12 traffic lights in Koforidua out of which 10 were functioning and two broken-down.

He explained that one of the non-functioning traffic lights, Ada Rd/Hospital Rd/Nana Kweku Boateng 1, has not been functioning for years now.

He attributed the broken down traffic lights to persistent theft of poles and cables and breakages due to the digging of manholes as well as a faulty controller.

Mr Kam said approval had been given to a contractor to upgrade the signalized intersection.

He said the Kassadjan Rd/Aburi Rd (Poly Junction) defects were due to power supply failure and had since 4th December 2021 been reported to the contractor in charge for maintenance.

He added that other areas which were malfunctioning have been fixed and also subjected to upgrading.

He urged motorists and pedestrians to exercise restraints while the situation was fixed.

The traffic lights, which were found not working, included Kassadjan/Aburi (Poly Junction), Shell Filling Station heading towards Effiduase, Regional Hospital and B Foster as well as Regional Hospital one that connects to All Nations University and Poly Clinic.

The Kassadjan/Aburi traffic light routes serve many pedestrians such as students crossing the road to and fro Koforidua Technical University, New Juaben SHS, basic schools and JHS, hostels and houses.

Some students, who spoke with the GNA, said several people use the traffic signal to cross the road but because it was faulty, pedestrians, especially students, find it difficult to cross.

They, therefore, appealed to authorities to fix the situation to help save lives.