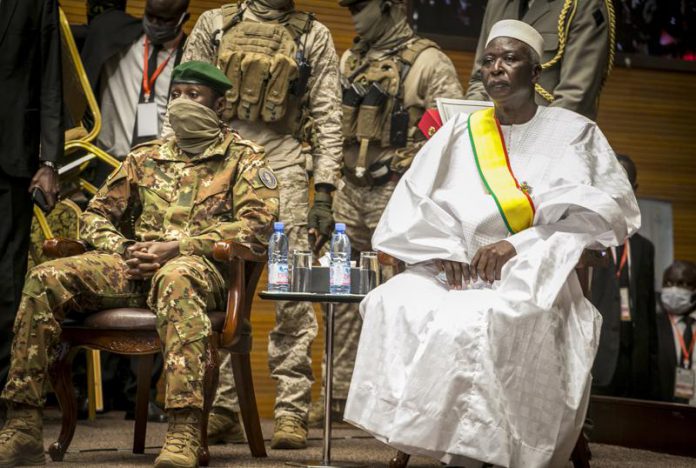 New leader was trained by the Pentagon and subsidized by France

In the aftermath of a second military coup within nine months in the West African state of Mali both the Economic Community of West African States (ECOWAS) and the African Union (AU) are calling for a speedy return to civilian rule.

ECOWAS and the AU suspended the coup leaders from the regional organizations while France has threatened to reduce its military presence in Mali until the political situation is stabilized while suggesting that a more “internationalized” force is needed.

Mali has been a center of attention by the United States and its former colonial rulers in France for many years. The most prevalent notion about the U.S. Africa Command (AFRICOM) and Paris’ Operation Barkhane in West Africa is that these foreign military forces are there to assist in the wars against Islamic rebels.

Yet long before the threat of armed groups in northern Mali, the U.S. was already making preparations to militarize the country. Concurrently, France has always sought to maintain a military involvement in its former colonies and other independent states for the purpose of protecting and expanding its economic interests in the region.

An attack on Operation Barkhane forces in central Mali on June 21 may give the imperialist power pause in regard to its downsizing of military troops. A car bomb explosion was reported in the Kaigourou neighborhood in the city of Gossi injuring several troops. Eyewitnesses say that there was a flurry of military helicopters racing towards the scene of the attack to evacuate wounded soldiers. (https://www.france24.com/en/live-news/20210621-car-bomb-hits-france-s-barkhane-force-in-central-mali-several-soldiers-injured-france-24)

Such operations are attributed to the Islamist armed groups which are ostensibly fighting the central government in the capital of Bamako which is in the south of the vast country. Several days prior to this incident, France had reported the arrest of a rebel leader inside of Mali.

The group which the rebel leader was heading is known as the Islamic State in the Greater Sahara (EIGS). This is one of several rebel organizations which have been battling the Malian government and its French military backers since 2013.

Mali is not the only state within the Sahel region which is facing similar security issues. An area which connects Mali, Niger and Burkina Faso has been a focal point for jihadist activity prompting the interventions of Operation Barkhane and AFRICOM.

These three states have resources which are important to the western industrial complex. Mali and Burkina Faso have gold and Niger is a major source for uranium. The basis for colonial intervention on the African continent beginning in the 15th century was to acquire slave labor, mineral resources, agricultural commodities, and new avenues for transnational commerce.

After the collapse of the Atlantic Slave Trade and classical colonialism during the 19th and later 20th centuries, the phenomenon of neo-colonialism came to the fore. This new form of economic and political domination can only be carried out if the African continent and other nationally oppressed regions remained under the domination of the global capitalist system.

The imperialist governments have consistently interfered in the internal affairs of the AU member-states to the extent that the national security of these nations remain elusive. Since 2012, France has admitted that 5,100 troops under their command have served in the tri-state territories of Niger, Mali and Burkina Faso along with Mauritania and Chad. Yet these countries remain sources of instability throughout the West and Central African regions.

With specific reference to the present situation in Mali and other contiguous states, the news agency France24 says: “Dadi Ould Chouaib, also known as Abou Dardar, was arrested on June 11 in the flashpoint ‘tri-border’ region between Niger, Mali and Burkina Faso, the site of frequent attacks by jihadist groups, according to the French military…. The extremists, affiliated with al-Qaida and the Islamic State militant group, have moved from the arid north to more populous central Mali since 2015 where their presence has stoked animosity and violence between ethnic groups in the area.”

Therefore, the ongoing role of Operation Barkhane and AFRICOM is not resolving the security issues in the Sahel region. Quite to the contrary, not only is the level of uncertainty escalating, the conflicts between various groupings within these states are worsening.

Of course, the situation in Mali and throughout the Sahel region in Africa illustrates the detrimental impact of imperialist militarism. Since the military coup led by Col. Assimi Goita even the Voice of America (VOA), a U.S. propaganda radio, television and print media outlet funded by the State Department, has openly admitted that this individual who has staged two coups in contravention of the protocols of the AU and ECOWAS was indeed trained by the Pentagon.

According to an article published on August 22, 2020 by the VOA, it notes that: “[T]he Pentagon acknowledged that Goita previously has participated in training with U.S. Africa Command and its special forces as part of multinational efforts to counter violent extremism in the region. But the Pentagon also condemned the mutiny, which it said runs counter to the training it has provided. ‘Colonel Goita and many other Malians have participated in Flintlock training exercises focused on countering violent extremist organizations, the rule of law in armed conflict, professionalism, and the primacy of civilian authority,’ Col. Christopher P. Karns, spokesperson for the U.S. Africa Command, said in an email to VOA. Flintlock is an annual special forces exercise organized by AFRICOM. ‘U.S. Africa Command has had a partnership and engaged with the Malian armed forces to confront violent extremism in the Sahel, a common interest and mutual concern.’” (https://www.voanews.com/africa/envoys-optimistic-after-meeting-mali-military-junta)

Although the Pentagon and the U.S. government as a whole are saying they disapproved of the military usurpation of power by Col. Goita, this is not the first instance of Pentagon-trained officers in Mali seizing power from an elected administration. In 2012 a similar situation developed when lower-ranking army officers took control of the government after an escalation in attacks by Tuareg and Islamist fighters in the north of the country.

The 2012-2013 recrudescence of military coups against civilian governments was linked to the failure of the administration of President Amadou Toumani Toure to quell the Tuareg rebellion in the north of the country. Another mid-level military officer, Amadou Sanogo, led a coup against the government in March of 2012.

Sanogo as well was given instructions in Pentagon-controlled military training facilities in the U.S. where he purportedly studied counter-terrorism tactics. Therefore, the link between counter-terrorism training, military coups against civilian governments and the continuing problems of insurgencies indicate that the existing policies towards Africa by the imperialist states can only result in more underdevelopment and political stagnation.

Whither Mali and the Sahel?

These are profound lessons for the post-colonial African administrations attempting to build their state structures and economies in a world system still controlled by international finance capital. In the U.S., the newly elected administration of President Joe Biden has yet to articulate a foreign policy towards Africa which distinguishes itself from the previous regimes of Donald Trump and Barack Obama.

In fact, it was the Obama administration which engineered the imperialist war against Libya resulting in the destabilization of North and West Africa. The dislocation from Libya has been cited in the resurfacing of the regional conflict in Mali only this time it involves the presence of Islamist rebel groups.

These same Islamist groupings were utilized in Libya as a means to justify the sanctions, blanket bombings and overthrow of the former government of Col. Muammar Gaddafi. Since 2011, the problems of displacement have intensified leading to the migration of tens of millions of people not only from Libya and neighboring states, notwithstanding the initiation of a war in Syria and Yemen, contributing to further instability and forced migration as refugees.

During the 1950s and 1960s, Mali under the political leadership of Modibo Keita, was a leading force in Pan-Africanism and non-capitalist development. Keita along with President Dr. Kwame Nkrumah of Ghana and President Ahmed Sekou Toure of Guinea-Conakry formed a coalition known as the Ghana-Guinea-Mali Union. They pledged to integrate the economies and political structures of their countries as a first step towards continental unification.

President Modibo Keita was overthrown by the military leader Moussa Traore in November 1968. Nkrumah was removed from office at the aegis of the Central Intelligence Agency (CIA) in February 1966. President Toure of Guinea died in April 1984 in the U.S. while receiving medical treatment and his government headed by the Democratic Party of Guinea (PDG) was removed from office by lower-ranking military officers soon after his death.

All three countries: Ghana, Mali and Guinea-Conakry, have never been able to reclaim their vanguard role within the African Revolution since these respective time periods when they fell victim to imperialist intrigue and opportunism. Consequently, the role of the military in post-colonial Africa has largely been a reactionary one. These historical trends can only be reversed when the masses of workers, farmers and youth take control of the state structures to construct socialism and African unification.

COP27 and the Imperatives for a Renewed African Security Framework

Imperialist Militarism and the African Crisis

“The Woman King”: Traditional Africa and the Atlantic Slave Trade