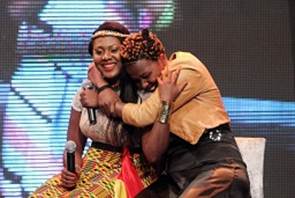 Ghana unfortunately lost the prize money to Tanzania?s Idris who emerged from the DStv Big Brother Hotshots house at the end of Sunday night?s thrilling 2-hour live extravaganza with USD 300 000 in the bank! He picked up an avalanche of viewer votes from the continent after 63 days of fun, drama and intrigue to become the hottest of the Hotshots in the 9th season of the continent?s most epic reality show. Idris saw off the challenge of 25 other housemates through 9 weeks of extravaganzas, weekly tasks, ?freeze? challenges and even an epic prank in true Big Brother style. After he?d picked himself up off the floor after the announcement, Idris told IK he was feeling exhausted after the ?long ride?. ?Big love to everyone in Africa, I have so much love out there, I?m going to give back every single day,? said the man from Arusha.

The show kicked off with a show-stopping performance from 17 evicted housemates, who got the chance to remind the continent of their Hotshots credentials. The glamorous finale was a star-studded affair, also featuring performances by the One Campaign Artists, Nigerian star M.I. and South Africa?s Unathi Msengana. Even the Top 8 housemates got in on the action, with a performance of their own to sum up their time in the house!

IK took viewers back through all 63 days of Big Brother Hotshots, with reminders of the Hotshots? stellar performances during the extravaganza tasks, the tender moments ? and the explosive ones ? they all shared, and all the fun they had learning about each other?s cultures, countries and personalities.

Evictions were never far from everyone?s minds, though, and when the SizweNtsalubaGobodo auditor delivered a bulging envelope to IK on stage, he got down to business. Over the course of the show, he evicted Butterphly, M?am Bea, JJ, Sipe, Nhlanhla and Macky2 from the house in pairs, leaving Idris and Tayo to count their lucky stars as the rest of the Hotshots looked on enviously from the stage.

As the time for the winner announcement drew near, Big Brother summoned the duo to the Diary Room for a final few words of encouragement before sending them out of the house to join IK on stage, through a curtain of fireworks.

Wangi Mba-Uzoukwu, M-Net?s Regional Director for West Africa was delighted with the way Big Brother Hotshots played out. ?The behind-the-scenes team overcame some astounding obstacles to get this season of Big Brother Africa on-air ? and they delivered a show that was bigger, better, more dramatic and more entertaining than ever before,? she said. ?Congratulations to Idris on being named the winner of Big Brother Hotshots ? and thank you to the rest of the housemates for providing the entire continent with 63 days of phenomenal entertainment?.

Sivan Pillay, Managing Director of Endemol South Africa said: ?We are very proud to have produced another great season of Big Brother Africa. Despite the devastating setback of the fire, it has been a monumental achievement to entertain the continent with our broadcast partner Multichoice?.

We do wish M?am Bea all the best.