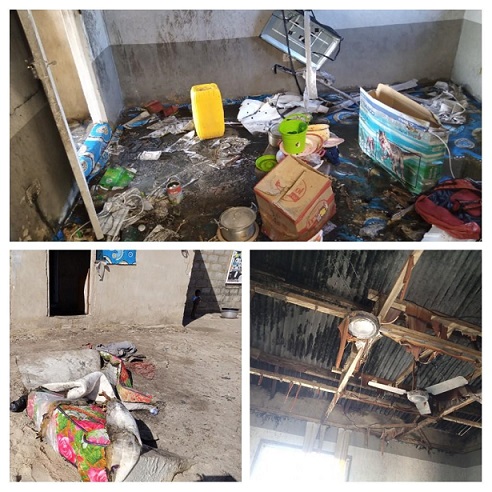 A man identified as Eric Kitcher about 25-years-old has allegedly set the apartment of a colleague ablaze after an argument at Akplabanya in the Ada West District of the Greater Accra Region.

The culprit alleged to be a drug addict went to the house of one Ezekiel Kitcher with broken bottles threatening to kill all occupants of the house.

According to eye witness, Ezekiel called all his family members into a room and locked them up due to the hostile attitude put up by the suspect and later called Mr Philimon Kitcher to come their rescue.

Mr Philimon Kitcher whose room was set ablaze explained that a misunderstanding ensued between Eric and another brother after a football match.

“We intervene to warn the accused, but he rather asked me to call for Fire Service Personnel because he is going to deal with me. Later I realized, my room was on fire and people were shouting his name,” he said.

He said property damaged cannot quickly be estimated, but he has lost undisclosed amount of money and personal property.

Mr Fredrick Tetteh Labia, Assembly Member for Akplabanya Electoral Area told the media that he organized the youth to chase the suspect to arrest him.

DSP George Aboagye, the District Police Commander confirmed the incident and said investigations have been launched into the matter.