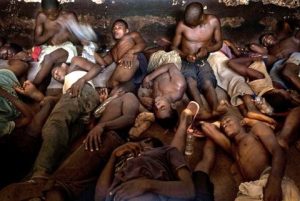 Lagam Eric Badabo alias Okada, the second accused, who pleaded not guilty was granted bail of GHȼ500.00 and would reappear before the court on 13th January 2017.

The two were accused of stealing the wax print cloths belonging to Madam Martha Notob a trader in Tatale in the Tatale Sanguli District of the Northern Region.

Prosecuting, Inspector John Yegoe said on 24th December 2016, the suspect was arrested at the Tatale Lorry Park with Lagam Eric Badabo trying to convey the items to his destination on a motorbike.

He said the suspect pleaded guilty to the offence of stealing the 80 wax print of clothing and was sentenced to six years in prison on his own plea.

William Appiah Twumasi, the Yendi Circuit Judge, said the wave of armed robbery and stealing has been very high in the area.

He also asked the police to return the recovered items to the owner.

Assistant Commissioner of Police (ACP) Okyere Anane Danquah, the Yendi Divisional Police Commander, said to halt the occurrence of armed robbery within the area, he created highway patrols to monitor activities in the area.
GNA