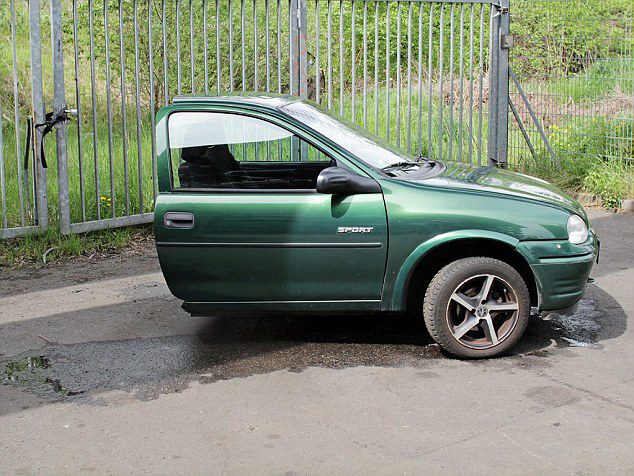 Two-wheel drive: German eBay user ?der.juli? took power tools to all of his possessions after being dumped by his girlfriend ? cutting everything in half including his Opel Corsa Half the workload: He also cut in half his Apple Macbook Pro ? now on sale on eBay for around ?7 Cutting all contact: A portable home phone and iPhone 5 were also cut into two by the eBay user

Following his divorce, this German man appears to have decided to split all of his belongings with his wife?literally.

The disgruntled ex-husband, who goes by the name Der Juli online, posted a video to YouTube showcasing him cutting chairs, beds and phones in half for his ex-wife. The video?s translated description reads ?Thank you for 12 ?beautiful years,? Laura! You?ve really earned half. Greetings also to my successor.?

Phones, laptops, teddy bears?you name it, he split it.

From their mailbox to their sofa, all of the man?s remaining halves are now up for sale on eBay, reports Mashable. One of the descriptions on his eBay page roughly translates as: ?From my half I must now separate, fond memories you can not remove.?

Unfortunately for Americans looking for some cut-up furniture, the man is not shipping to the U.S. If you are in the neighborhood though, he says he will accept cash payment upon delivery.

Communication Ministry committed to closing the gender gap in ICT