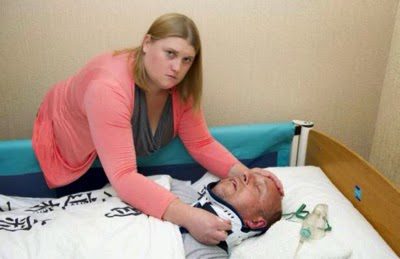 This sounds ridiculous but it actually happened in the United Kingdom.
A man of 47 years old-Alan Knight from Swansea stole over ?40,000 from his elderly neighbor and he was due to face 19 counts of theft and forgery. When it was time for him to appear in Court for his theft, he went into coma for 2 good years.

Alan claimed he was in a vegetative state and could not get up, let alone come to Court and as seen in the photo above, his wife also played along. The father-of-three?s wife, Helen, was part of the scam as she was pictured ?caring? for her ?comatose? husband.
For 2 years he was able to get away by doing this until doctors watching his hospital room spotted him eating, wiping his face and even writing?BUSTED!
After he was caught, Det Con Paul Harry, from South Wales Police, said: ?In my entire career this is the most calculated, long-term deception of a vulnerable, elderly neighbour I have ever seen.?
This man is definitely a smart man, lol!

REJOINDER: “Implementation of ICUMS 2 years on and other Port Matters”