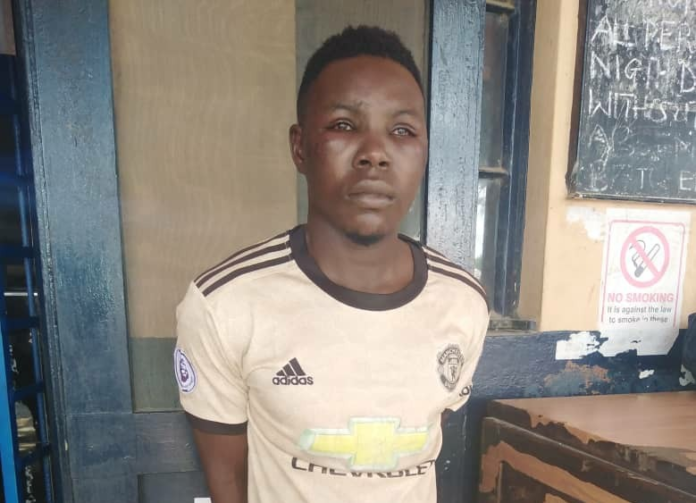 The Denu District Police Command has arrested a 28-year old Korshie Atitso and on a lookout for three other accomplices for robbery and causing harm at a house located in Kpogedi, in the Ketu South Municipality.

The arrest followed calls from the community that the suspect and his gang attacked a house at dawn ostensibly to steal motorbikes parked there, ending up inflicting gunshot wounds on a victim and making away with a sum of GH¢250.00 and phones.

ASP Joseph Nakoja, Denu District Commander speaking to the Ghana News Agency (GNA) said his officers moved to the scene to make the arrest after one Mr Tahiru Amadu called at 0130 hours on September 24, to inform the Police that some four robbers on a motorbike attacked a house in the Zongo community.

He said Police gathered that the suspect fired warning shots demanding occupants of the compound house to surrender keys to their motorbikes and the ensuing noise attracted neighbours to the scene.

“The community mobilised and came to the house in an attempt to stop the robbery. The suspect then aimed at and shot at Mr Zibor Ahmed, whose arm the bullet hit and got a bullet lodged in his left thigh.”

“The neighbours who surrounded the suspect, pounced on him and disarmed him. While this was happening, his three accomplices who stole phones and GH¢250.00 from about four tenants, managed to escape on their motorbike,” the District Commander narrated.

ASP Nakoja said Police retrieved “Taurus Ultra-Lite 38 Special Revolver pistol, nine live and four spent 9.07mm ammunition and a machete” from the suspect and said the Command would conduct further investigations to apprehend the other accomplices.