dpa/GNA – A man was injured on Tuesday after being attacked by a polar bear on the Svalbard Archipelago off northern Norway, officials said.

The polar bear was later shot.

The injured man was flown by helicopter to Longyearbyen, the main settlement on the Arctic archipelago. His injuries were not serious, a statement from the governor’s office read.

The governor’s office said the man was accompanied by another man at the time of the attack in the Mohnbukta bay on the east side of Spitsbergen, the archipelago’s main island.

They were investigating ice conditions in the bay at the time of the attack for a local firm.

It was the first polar bear attack since August when a Dutch tourist was killed in his tent at a camping site near Longyearbyen. 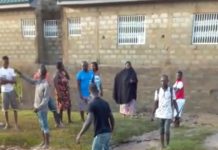