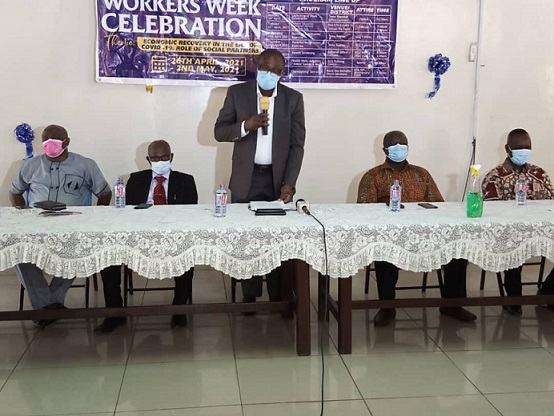 The Public Utilities Workers Union (PUWU)has encouraged managements of establishments to engage themselves in union activities to strengthen their fold.

Mr Michael Adumatta Nyantakyi, General Secretary of PUWU who gave the encouragement said “we are all workers, if we don’t all put ourselves together and make the unions strong we will be found wanting”.

Mr Nyantakyi stated during the launch of the Electricity Company of Ghana (ECG) Tema Regional Workers’ Union Week Celebration on the theme; “Economic recovery in the era of COVID-19, role of social partners”.

He said it was worrying when those in management members were not interested issues that could significantly enhance their wellbeing.

“There are some Regional Managers who stifle activities of the union but when in trouble, and need their salary to be negotiated they run to the union leaders,” he said.

He stressed that no one at the work place should think that he or she was out of togetherness as “our destinies are tied to each other”.

The PUWU General Secretary urged all workers to show commitment to the progress of their establishments as according to him organizations that were doing well had a strong collaboration between top management and leadership of the unions.

He said the unions put emphasis on the success of the companies because they knew that for staff to get what was due them, the company must meet its target and therefore the need for all to be concerned when things do not work as expected in their establishments.

He noted for instance that the ECG unions took the initiative to embark on the revenue mobilization exercise even though they were not obliged, but such act would rake in adequate finances for the company.

Mr Nyantakyi asked workers to consider what they could contribute towards the sustainability of the company and by so doing would be securing the future of their children and relatives who might gain employment.