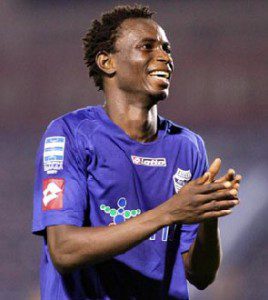 Kumordzi, 30, was sidelined for the whole of last year after suffering a broken leg in the 2013/14 league season.

Peter Maes introduced Bennard Kumordzi in the derby against STVV to make his comeback , but insists they were just symbolic minutes.

However, the former Liberty Professionals strongman says he will help the Smurfs to be successful in 2016.

” I was elated I felt no pain. Whether I will immediately make it into the team will be the coach’s decision,” he added.

When Peter Maes was asked he said, “One thing is a fact : Kumordzi’s fitness will definitely help Genk. Especially since he is hungry to play after a year of absence.”

“He is an intelligent player and I expect him to make a massive comeback into the team now that he is back,” Maes concluded.