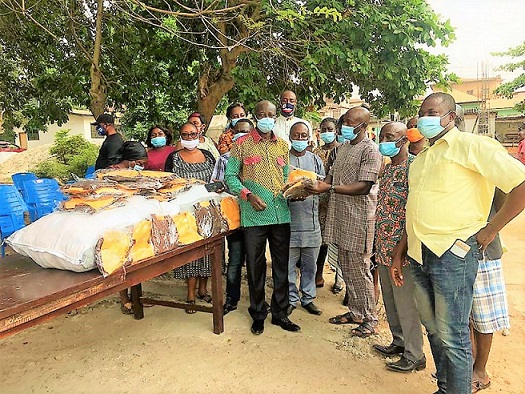 Dr Mathew Opoku Prempeh, Member of Parliament (MP) for Manhyia South, has donated more than one thousand school uniforms to needy pupils in some selected schools in the Constituency.

The donation was to encourage the beneficiaries to attend classes regularly and enhance their educational and career development.

Mr David Oppong, Kumasi Metropolitan Director of Education, presenting some of the uniforms to the Odumase Extension M/A Basic School in Kumasi, lauded the MP, who is the immediate-past Minister of Education.

The authorities, he noted, had recognized the instrumental role the MP was playing to resource educational institutions in the area for effective academic work.

He cited the provision of furniture, science kits, building and rehabilitation of classroom blocks, amongst others.

Mr Oppong indicated that quite some children in the metropolis were from poor homes and as such ought to be assisted to keep them in school.

He cautioned educational institutions to observe the COVID-19 safety protocols for the wellbeing of their pupils and students.

Mr Christopher Banieh, Headmaster, Odumase Extension M/A Basic School, receiving the items on behalf of the beneficiary pupils, thanked the MP for his care for the underprivileged.

He promised that the items would be distributed accordingly.