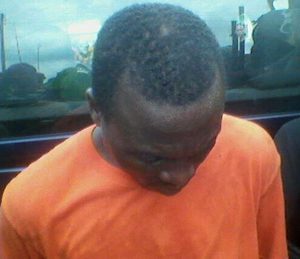 Kobina Gama, a 38-year-old man at Nyinasen, a suburb of Cape Coast in the Central Region, has been arrested for hacking his wife, Efuwa Kweinowa, with a cutlass, and leaving her for dead.

Kweinowa, whose condition was critical, was later rushed to the Central Regional Hospital where she was admitted, but died the following day.

The body of the deceased had since been deposited at the Central Regional Hospital Morgue for autopsy.

Kobina Gama, who fled to his family house at Obuasi in the Ashanti Region after the diabolic act, was arrested by the Unit Committee members of the area and handed over to the police last Friday.

The police at Obuasi had since transported him to the Jukwa Police Station where the incident was reported about two weeks ago and he would soon be put before court in Cape Coast, according to the security agency.

Briefing DAILY GUIDE over the weekend, a source close to the police said the incident happened on December 16, 2013.

According to the source, the couple, who had seven children, always fought due to the man?s excessive drinking habit, a situation which compelled the wife to threaten to divorce him.

The source hinted that the suspect, who was not happy about the threats to divorce him, called his wife who was with two of their children, and asked her to meet him at the farm, since he was on his way there to discuss an issue with her.

Information gathered by DAILY GUIDE indicated that the suspect, who had a cutlass in his possession when he appeared at the farm, immediately pounced on his wife and slashed her head with it.

He was said to have carried the wife after inflicting the fatal injury on her, dumping her by the roadside and fleeing the scene.

The source added that the two children, amidst shouting for help, dashed to the house to inform family members about the horrific incident.

DAILY GUIDE gathered that the family members went to the roadside and picked her to the Central Regional Hospital where she was admitted, but unfortunately died on December 17, 2013.