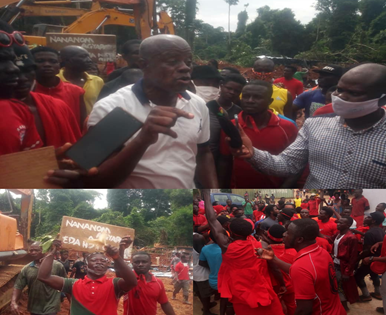 The Manso-Nkwata Traditional Council has vowed to resist any attempt by people to mine in the Oda Forest Reserve at Aboaboaso in the Amansie South District.

The Council said, together with the people in the area, it would not allow any form of mining activity in the forest without appropriate consultations and environmental impact assessment.

Nana Adusei Kwadampim, Gyaasehene of Manso Adubia, who spoke to journalists after touring the forest to assess the extent of damage caused by illegal miners, said they would go all out to protect it.

He said the Traditional Council was concerned about the extent of destruction to water bodies, trees and soil in the forest.

He said some faceless people with fake documents were illegally undertaking mining activities at the forest and the chiefs and youth went there to destroy the structures they had put up to prevent them from further destroying the forest.

Nana Kwadampim said the youth were actively monitoring the situation and would confront anybody who tried to desecrate the forest reserve.