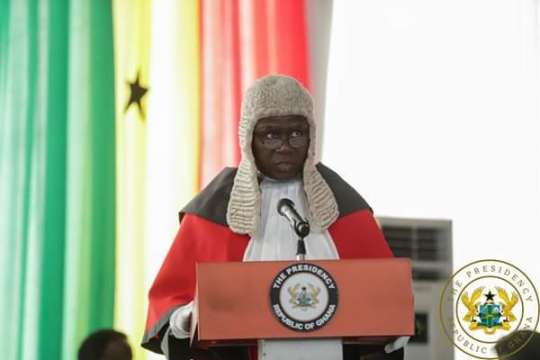 Chief Justice Anin Yeboah on Tuesday launched the fourth edition of the Manual on Election Adjudication to address electoral issues that might arise from the December Presidential and Parliamentary Elections.

The 397-page manual has ten chapters focusing on the right to vote in the Presidential and Parliamentary Elections, Elections disputes raising issues of interpretation, and enforcement of the 1992 Constitution, and electoral offences and sanctions.

He said the recent decision of the Supreme Court in the consolidated Suits Nos J1/9/2020 and J1/12/2020 entitled National Democratic Congress vrs Attorney-General, and the Electoral Commission.

“Also to be noted is the amendment of the Supreme Court rules, effected by the Supreme Court (Amendment) (No 2) Rules, 2016, (CI 99) that has introduced strict timelines for the management and hearing of Presidential Elections disputes, which required the court to determine any such dispute on the forty-second day after its filling.

He said the two appendices, which dealt with the applicable laws and processes covering pre-election activities, were revised to keep pace with changes in the law including applicable decided cases of the supreme courts.

The Chief Justice said the manual was a testament to the commitment of the Judiciary to the country’s democratic evolution.

The Chief Justice said elections were very competitive and brought about so much energy, passion, and resources, which required to be properly harnessed to avoid the potential for conflict and misunderstanding.

“Election speaks directly to the essential of the country’s Republic that, the will of the people must be fully and properly reflected in the results of each electoral contest.

“This imposes a duty of fairness, transparency, in the entire process on all the institutions whose duty it is to manage that process,” he said.

He said the fair determination of electoral disputes by the Judiciary served the purpose of electoral integrity and that without such an assurance to the contestants, disputes that arose after elections might end up on the streets, resulting in violence and other related acts that could threaten any democratic country.

“While not everyone will agree with all our decisions, I can assure the country that the Judiciary have all been motivated by the national interest, underpinned by firm judicial principles, geared towards preserving the sanctity of our motherland,” he said.

“As the country prepares for the December polls, I wish to assure the country of the thoroughness, the professionalism, and the patriotism with which the Judiciary will approach and dispense its duties in an efficient manner,” he said.

He said as part of the forthcoming elections, the Judges were trained to better improve their capacity in handling disputes that might emerge after the elections.

Additionally, the Chief Justice said Justices of the Supreme Court had travelled to various parts of the country to sensitize Judges and magistrates to approach electoral disputes expeditiously.

He expressed the confidence that the Judges would bring these added skills to bear in the determination of disputes which might arise after the elections.

Justice Jones Dotse, a Justice of the Supreme Court and the Chair of the Election Manual Review Committee, said the manual aimed to provide an easy to read, user friendly, easily accessible compilation of all relevant information and resources to aid stakeholders in elections.

He said the committee took steps to monitor the voters’ exhibition exercise and provided on the spot advice and guidelines to all magistrates who performed roles assigned them as district Registration review officers under the C.1.91.