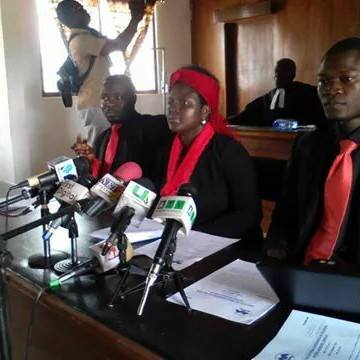 The Chiefs and people of Manya Krobo have hailed the Supreme Court’s ruling, ordering the suspension of the March 3, 2015 nationwide assembly elections in the wake of the boundary dispute between Manya Krobo and the Osudoku Traditional Area which was going to affect the elections at Akuse-Natriku.

Below is their full statement:

SUSPENSION OF MARCH 3 DISTRICT ASSEMBLY ELECTIONS
? Krobo Chiefs, youth hail decision of the Supreme Court
? But March 3 demonstration still course
Saturday February 28, 2015, Odumase-Krobo:The Chiefs and people of the Manya Krobo Traditional Area who were going to demonstrate on Tuesday March 3, 2015 to prevent the Electoral Commission (EC) from conducting the assembly elections in the Natriku electoral area (Akuse) have hailed the Supreme Court?s decision ordering the postponement of the elections and the start of the entire process all over again.
They said, not only is the decision of the court a real victory for democracy in Ghana but an opportunity for the EC to correct the anomaly of wrongly placing the Natriku electoral area under the Shai Osudoku District of the Great Accra Region instead of Lower Manya Krobo in the Eastern Region, contrary to provisions in the 1992 constitution and judgments of the Supreme Court..
The wrong placement of Natriku in the Shai Osudoku District instead of Lower Manya Krobo Municipality and the determined effort by the EC to hold the March 3, 2015 elections as such was going to disturb the peace of the area since the Chief and people of Manya Krobo were warming up for a showdown and to resist the EC. They have since served the Akuse District Police Command a notice to embark on a demonstration on Mach 3, 2015.
They indicated that their plan to take to an aggressive street protest to draw public and national attention to the illegality is still on coursedespite the postponement of the elections.
Hilary Saki Kodji, Spokesperson for KlomaGbi (a Krobo Youth Group at the helm of the campaign) said ?By putting Natriku under the Shai Osudoku District (Great Accra Region) instead of Lower Manya Krobo (Eastern Region) not only is the EC breaching Article 5 of the 1992 Constitution, but disregarding the numerous Supreme Courtjudgments which place the electoral area in question in Lower Manya (Eastern Region).
He wondered why the EC will also ignore the directives from the local Government Ministry which also directs the placement of Natriku in Lower Manya indicated in a letter dated March 14, 2013.
Mr. Kodji said ?We are not only out to aggressively defend our rights and heritage but to defend the sanctity of the constitution and ensure that the Supreme Court, the highest court of the land is not taken for granted?.
-ENDS-
For more information, please contact the Spokesperson for KlomaGbi, Hilary Saki Kodji on 0242 714 101 or Nene Asada Ahor, PRO of the Manya Krobo Traditional Council on 0208 242 031

BACKGROUND
Prior to the nationwide assembly elections in 2010, the Ministry of Local Government and Rural Development initiated an electoral area re-demarcation exercise that ended up changing the boundaries of the Lower Manya Krobo Municipality.
In the said exercise, seven electoral areas originally part of the Lower Manya Krobo Municipality of the Eastern Region namely Zongo New Town, Akutue, Osorkutu, Bungalow, Natriku,Amedeka and Salon – were illegally aligned to the Shai Osudoku District in the Greater Accra Region, creating a constitutional issue which went to the Supreme Court.
The Legislative Instrument (LI 1983) initiated by the Ministry and passed by Parliament to give legal backing to the re-demarcation exercise was declared null and void by a unanimous decision of a nine member panel of the Supreme Court on June 13, 2012.
In a letter from the Ministry of Local Government and Rural Development dated March 14, 2013 and signed by the then Minister, Hon. AkwasiOppong-Fosu, clearance was sought for the EC to hold the assembly election which was suspended in 2010. The letter specifically mentioned the 7 electoral areas that form the Akuse Township including Natriku.
The EC however held the elections but excluded Natriku. Presently the EC is preparing to conduct the upcoming assembly elections at Natriku but under the Shai Osudoku District instead of Lower Manya, an act that runs contrary to the provisions in Article 5 of the Constitution and the 2012 judgment of the Supreme Court.
The chiefs and people are therefore out there to protest the breach of the constitution and the disregard for the authority and rulings of the Supreme Court, since appeals and petitions to the authorities are yielding no result.