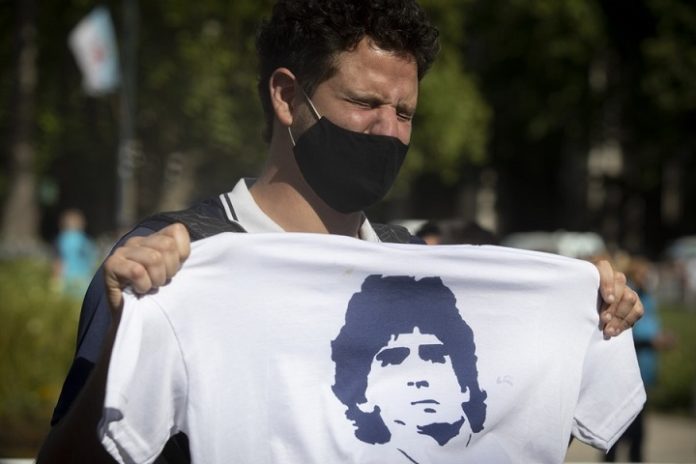 Argentine football icon Diego Maradona was laid to rest on Thursday in a private burial service attended by his family and close friends.

Around 40 people were present for the 30-minute ceremony at the Bella Vista cemetery on the eastern outskirts of Buenos Aires.

Maradona was buried just before 8 pm (local time) next to the graves of his parents Diego Sr and Tota. Among those to attend were Maradona’s first partner Claudia Villafane and his daughters Dalma, Giannina, and Jana. Former girlfriend Veronica Ojeda and their son Dieguito Fernando were also there.

Security was tight for the event and local media reported that it took place below a gazebo to avoid media drones capturing images.

Maradona died of a heart attack on Wednesday, aged 60. His passing prompted mourning worldwide, particularly in Argentina, where he was revered for leading the national team to the 1986 World Cup title. Earlier on Thursday, tens of thousands of fans gathered outside the presidential palace, where Maradona’s coffin was on display, to pay their last respects.

Many mourners sang stadium chants that hailed Maradona’s genius and light-heartedly teased Argentina’s rivals. “The guy who doesn’t jump is English,” went one. “Brazilian, Brazilian, you are so bitter, Maradona is better than Pele,” said another.

Crowds extended for more than 15 blocks as fans hoped to catch a glimpse of the coffin, which was draped in Argentina’s flag and the national football shirt emblazoned with Maradona’s No. 10. Local media said police were forced to use tear gas and rubber bullets to hold back the crowd.

There were also reports of injuries and arrests, and the violence led authorities to end the public visitation late in the afternoon. The police actions drew an angry response from interior minister Wado de Pedro, who defended Argentinians’ right to see Maradona’s casket. “This popular tribute cannot end in the repression .. of those that came to say goodbye to Maradona,” he said.

News of Maradona’s death, which began to circulate around midday on Wednesday, brought Argentina to a standstill. President Alberto Fernandez declared three days of national mourning while many companies gave their employees a day off on Thursday. The Argentine Football Association (AFA) also postponed league and domestic cup matches scheduled for Thursday and Friday. Maradona, who died at his home near Buenos Aires, is survived by five children and his former wife, 58-year-old Claudia Villafane, whom he divorced after 20 years of marriage in 2004.

Gyakie and Black Sherif have been buried – Blakk Rasta

Victims of Appiatse explosion to be buried on March 11

Ama Benyiwa Doe to be buried in December

Bobby Billion presents his vulnerable side on new single ‘Argentina’