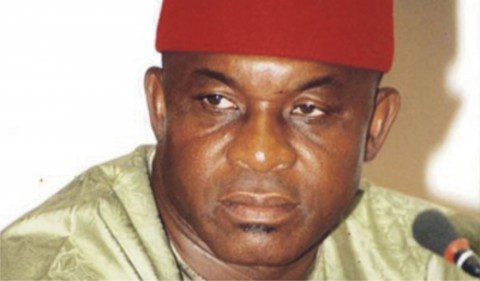 Senate president, David Mark, on Thursday warned neighbouring countries and the international community encroaching on Nigeria?s border lands that Nigeria would never again lose any portion of her lands to other countries.

Mark?s warning came on the heels of an alarm raised by the Senate leader, Senator Victor Ndoma-Egba, who hinted that Nigeria could lose some communities to Cameroon.

There is an international boundary adjustment currently going on in Danari, Boki Local Government Area of Cross River State, and Ndoma-Egba fears that Nigeria might lose some communities in the area council, if the boundary adjustment was not promptly halted.

Bringing the matter under Order 42 of the Senate Standing Rules, Ndoma-Egba explained that the exercise, which is going on in his constituency, has already generated a lot of anxiety among his constituents.

?They (constituents) fear that at the end of the exercise, we will be losing not just a community, but a number of communities to the Cameroon. So, with your kind permission, I will like to bring a formal motion on this on our next legislative day (which is June 24),? he said.

Ndoma-Egba, who noted that he would have taken the motion on Thursday owing to its urgency, hinted that he decided to defer the matter to the next legislative day to enable him get details.

?I have information that right now, pursuant to the Green Tree Agreement that resulted in the ceding of Bakassi to the Cameroon (in 2008), that some boundary adjustment exercise is going on and they are right now in a place called Danari.

?Danari is in Boki Local Government of Cross River State, and it is in my constituency.  And there is a lot of anxiety among the people that the exercise will result in loss of territory to the Cameroon.

?I don?t have the details, but I just thought Nigerians should know that this is going on, and this is the anxiety. I am going to the constituency now; when I get home I get more details and then bring a formal motion on the floor. I have received that information that is to underscore the anxiety that is going on among the people of the affected communities,? he said.

He added that the Green Tree Agreement (GTA) came in with consequent boundary adjustments right from Borno down to Cross River.

He also explained that the exercise going on in Danari is part of what was envisaged on the GTA.

?The Green Tree Agreement wasn?t all about Bakassi; it involved well established international boundaries from Borno State right down because we have boundaries right through with the Cameroun from Borno State through Adamawa down to Cross River,? he stated.

Reacting to the information given by the Senate leader, Mark warned off countries not to nurse such intention.

?This country must never, never under any circumstance, surrender one millimeter of our land to any country, irrespective of who is supervising it. Whether it is the United Nations, or African Union. It is a serious issue and the matter will be discussed in our next legislative day,? he warned.

He, thereafter, called for vote on the proposed motion, and it received an overwhelming approval by the senators that the motion be moved by Ndoma-Egba on June 24, when the Senate would resume from its two-week recess.

Meanwhile, the Senate has committed the N322.6 billion, being the 2014 Budget of the Niger Delta Development Commission (NDDC) to its Committee on the NDDC for further legislative action.

It also received report of the Committee on National Planning and Economic Affairs and Poverty Alleviation on the screening of Dr. Casmir Anyanwu of Imo State and Mr. Ken Kayama of Bayelsa State for appointments as members of the Revenue Mobilisation Allocation and Fiscal Commission (RMAFC).

The Red Chamber also received the report of its Committee on National Identity Card and National Population on the screening of Messrs Baba Makau, Yusuf Anka, Abdullahi Abarshi and Mohammed Gumel for appointments as members of the National Population Commission (NPC).

To mark the end of the third session of the 7th Senate, the Senator on Thursday adjourned plenary to June 24, 2014.