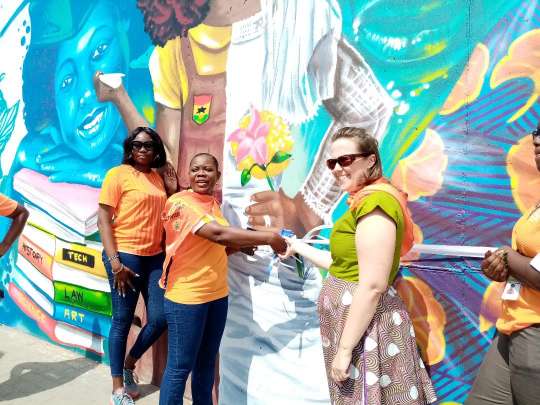 The United Nations Population Fund (UNFPA) has reiterated its commitment towards the fight against Sexual and Gender-Based Violence in the Ghanaian Communities by unveiling murals on child marriage at Malam Junction, Circle and other places.

Madam Selina Owusu, National Programme Analyst-Gender, UNFPA in unveiling the paintings said it was part of their 16 days of activism against gender violence.

She said it was to raise awareness on all forms of sexual and gender-based violence and to help the survivors to know that there was help out there.

She encouraged victims of sexual violence to break their silence and seek support from agencies and organisations who were ready to give them assistance.

Madam Selina called on people in society to report any form of violence they witness within their communities to the appropriate authorities.

She stated that adolescent girl’s future would be bright if they were given the needed assistance and that if their education was curtailed then the girl’s future looked bleak.

She said an issue that societies should be aware of was ‘child marriage’ which had a negative impact on the child’s development.

She said child marriage destroyed the future of girls and if they were allowed to go to school, they would contribute towards development.

“if you marry off a child then you have completely destroy the future of that girl, but if that girl is allowed to go through all levels of education, then she comes out to also contribute to the development of the country”, she said.

She said the fight against sexual and gender-based violence would not end after the 16 days of activism and called on the media to help in the fight.

Mohammed Awudu, an International Graffiiti Fine Artist who painted the murals was glad to help in the fight against gender-based violence adding that child marriage happened everywhere in the Ghanaian communities and victims did not have support to come out publicly with those problems.

He said the art work that was unveiled would help encourage people to support victims of sexual violence.