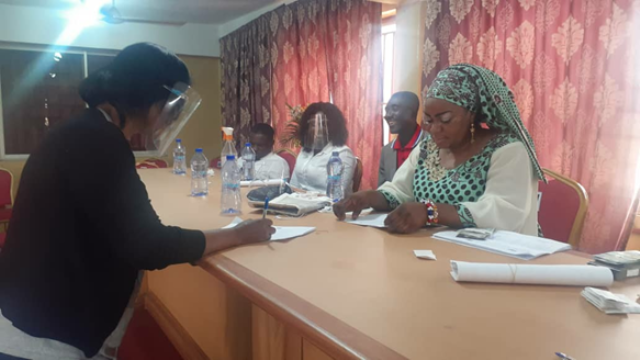 The Ashanti Regional Office of the Microfinance and Small Loans Centre (MASLOC) has disbursed more loans to market women in the Suame Municipality.

A total of 200 women belonging to eight groups with 25 members each benefitted from the latest disbursement after paying back loans granted them earlier by MASLOC.

They received between GHC 1,500 and GHC 2,000 to improve their businesses at an interest rate of one per cent per month.
Hajia Zeinab Sallaw, the Regional Director of MASLOC said her outfit was poised to economically empower its clients by helping them grow their businesses.

She said empowering market women would translate to improved livelihoods in various homes due to the significant roles they played as mothers and wives.

She disclosed that the loans were approved after the beneficiaries paid back loans advanced to them without default.
“We gave them loans between GHC 800 and GHC 1,000 which they have successfully paid within six months so we are increasing the amount to improve their businesses”, she stated.

Hajia Zeinab explained that, “this time, we are giving them loans ranging between GHC 1,500 and GHC 2,000 which we believe will take their businesses to the next level”.

Some of the beneficiaries who spoke to the Ghana News Agency (GNA) praised MASLOC for extending the credit facility to them in this COVID-19 era, where funds were difficult to come by.

They said they were going to expand their businesses and promised not to default in the repayment as appreciation for the support.