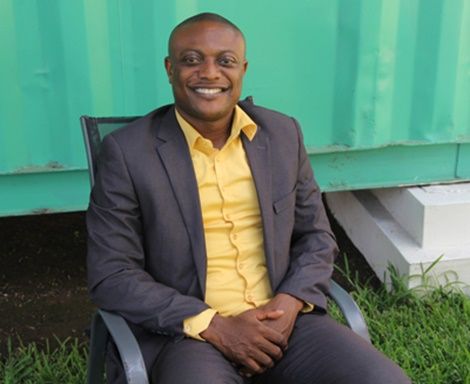 Never before in the life of popular Ghanaian lawyer, Dr Maurice Ampaw, has he publicly opened up on his life and upbringing than he did in this exclusive interview with News-One.

Lawyer Ampaw spoke about his family, late politician-father, growing up under a single parent, his perceived controversial nature and how he flees from his female fans who may tempt him sexually. Please enjoy the transcript.

How come you are heard more on showbiz-related issues rather than issues about law and legalities?

Not entirely true. In 2013 I sat on TV3 for several months expressing my legal opinion on the electoral petition at the Supreme Court.  There are several other examples to show but it seems when I talk about showbiz, it gets reported more and that is why people like you have this opinion about me. But it is also true that I have a lot of humour in me and I love to raise social issues about anything, from love to music to relationship to sex. I feel very comfortable because they are not political and do not come with the stress and tension and all that.

Secondly, I happen to be a very critical person and when I raise issues, I go all out so I mostly do not want to comment on political issues because in Ghana anytime a political issue comes up for debate, we take sides based on our political colours but not based on the substance of the issue. Whichever way I argue, I would get branded with one party or the other. I don?t want to come into such issues.

Those who know me, after lecturing for almost 15 years, I have some of my students becoming news editors, editors and programme directors on radio, TV, newspapers and online so when there is an issue and they want a legal opinion, they fall on me and I deliver. I have a lot of humour in me and because I say what their audience want to hear they keep calling me. So when the issue of Castro came up,   I gave my opinion; the issue of Kwaw Kesse, KKD, gays, and all that. I don?t go chasing them to talk.  Halifax, you have called me for this interview; someone would say Lawyer Ampaw loves publicity but they won?t know you invited me and I have to honour it because I respect you.  Why would I chase publicity when I am already a public figure? Why would I chase celebrity status when I am already being celebrated?

Did you say you lectured for some number of years?

Yes. I am a lecturer. I have lectured for exactly 13 years of my life in five different tertiary institutions. I lecture Business Law, Company Law and Media Law. I lecture at the Central University, All Nations University, Meridian Pre-University, Trans-Africa College, Regent University and I did a little bit at the Ghana Institute of Journalism.  I have students in most media houses across the country and they are doing very well.

Do you practise as a lawyer?

Definitely I practise; I go to court on a daily basis and win more cases. I used to have my own Chamber?M.K. Ampaw & Co. Then I decided to merge with my partner, Lawyer Ahmed. So now we have the Ahmed Legal Consult at the Spintex Road near the Stanbic Bank. But my Legal Advocacy Foundation is right behind Radio Gold at Lartebiokorshie.

Your fame, style and swag would make you a fair attraction to ladies.

Before I became a public figure, I was a lecturer and I had met and dealt with all manner of beautiful ladies of all forms and shapes and I had mastered how to handle female fans without getting personal. It is an act that should be mastered by all successful young men who want to survive.

I stand in front of the class and I tell the female students that I am a feeling lawyer but I am vulnerable so they should not tempt me. I avoid places that I may get trapped. How can I be talking about KKD publicly and not become a more careful young man? I keep my distance. I don?t talk love on phone or on whatsapp. I flee from temptation.

Are you in a relationship?

I am married.  And we have a set of twins?one boy, one girl: Maurice and Maurine. My wife and I were blessed with them when we celebrated our tenth anniversary. That same year, I was given an honorary doctorate degree on humanitarian grounds, an international nobel prize award which I won with John Mahama when he was Vice President.

I was born on September 24, 1968. My father is the late Gibson Dotse Ampaw. He was a Minister under the Busia government and won the Akyem Abuakwa seat for the UP. My mother, Gladys Darko, divorced my dad just two years after my birth. So I grew up under a single mother and it was a difficult thing. We moved from our seven bed-room house and went to stay at a ghetto, Sukura, in a single bedroom and one hall apartment. That was where I grew up.

Where was your dad by then?

He was with his other wives enjoying.  One of his wives?I believe his last wife?later got married to Jake Obetsebi Lamptey. My dad was not taking care of us. My dad only pays for our school fees and he does not joke with that aspect. My mom was more into church and would leave for church the whole week, leaving us to mingle with the zongo boys. I became tough and fell in love with the poor and looked at the rich with suspicion because of the way my dad was treating us. I became bitter anytime I went around town and people showed me my father?s buildings.  He had about eight properties and was a successful lawyer with a big chamber.  But I decided to prove a point, and that is what has led me this far. At age seven, I decided to become a pastor and a lawyer.

When I became a lawyer, my books were in my car boot but I was happy, hopeful and determined? I was called to the Bar in 2001 and decided to do a lot of pro bono cases by visiting the rural areas to educate Ghanaians on legal issues and I set up a lot of legal clubs and my Legal Advocacy Foundation.

Some say you are NPP.

Don?t mind those talking like that. I am not partisan and I vote on principles, not on colours.  Look, there are many NDC leaders today whose parents were from other parties. Same in the NPP;  check the parentage of some of their current leaders and you would realise the political party your parents belong to cannot determine which party you would belong to when you grow up and become a man.

What is unique about you?

I believe God has endowed me with passion and with a commitment to be truthful and honest and then think on my feet and speak my mind.

Why are you controversial?

It comes as a surprise to me when I hear people say Lawyer Ampaw is controversial. What I think is that I hardly restrain myself; when I am convinced about an issue, I have to raise that issue. I am also assertive when I raise issues. I like to challenge the status quo because I believe every rule or principle has an exception we can build upon for improvement.

It is in challenging the status quo and the assertive way I go about it that makes people conclude I am controversial. I am not controversial; I raise controversial issues and I love debating on them.

You love debate, even when people do not agree with you.

Debates and public discourse help us improve on our policies and even our thinking because we rub minds and adopt the best option available. When people do not agree with you, it shows you are neither perfect nor all knowing.  Opposing views are normal and should be accommodated. My only challenge is when people who do not agree with you do so without decorum and respect; when they insult rather than make their point with decorum.

I am warming up because I believe God is taking me to another height.  My fans all over the country keep rising and I expect to serve them better. I am praying to God for mercy to protect me against all kinds of evil so I can work harder to serve humanity.

Any final words for readers?

Let us not be influenced by money or material things but by the truth, and we have to remain humble even as we serve humanity.