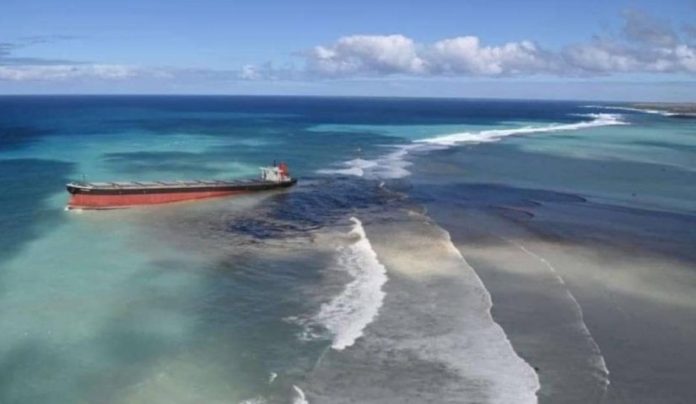 Authorities in Mauritius were battling a huge oil spill from a Japanese vessel off the coast of the popular tourist island on Friday.

Photographs from the air showed the oil slick spreading through the turquoise waters off the island. Other images in local L’Express newspaper showed blackened beaches and dead marine life. Greenpeace said the spill would have devastating consequences.

“The Japanese oil tanker MV Wakashio ran aground around July 25 and is now leaking tons of diesel and oil into the ocean,” said Happy Khambule, Greenpeace Africa climate and energy campaign manager.

“Thousands of species around the pristine lagoons of Blue Bay, Pointe d’Esny and Mahebourg are at risk of drowning in a sea of pollution, with dire consequences for Mauritius’ economy, food security and health.”

Deborah de Chazal, executive director of the Mauritian Wildlife Foundation, which is working with the government to address the disaster, told dpa the boat was carrying 4,000 tons of oil.

“Booms have been installed to collect the oil near the wreck and others to protect some key sites including Blue Bay Marine Park,” she said.

“Help and equipment is being brought in from abroad as Mauritius has limited equipment in the country to address the oil spill. I understand there are discussions to see if the remaining oil can be pumped from the wreck.”

The crew of the Panamanian-flagged ship the Wakashio, which ran aground, are in quarantine on the island – which is located off the east African coast – local media reported.

The freighter, owned by Nagashiki Shipping in Okayama, Japan, was en route to Brazil from Singapore.
“In order to prevent an adverse environmental impact as much as possible, we have put up a fence and started recovering the oil,” a company official said.