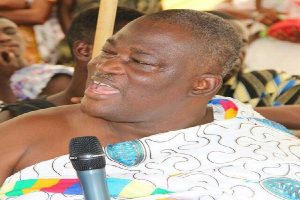 The Manhyia Palace has officially announced its support for the Asantehene’s Mawerehene in the upcoming Ashanti Region Council of State race slated for next week.

Secretary to Otumfuo Osei Tutu II, Kofi Owusu Boateng, who confirmed the news at a press conference at the Manhyia Palace on Saturday said the Kumasi overlord has cleared Baffour Hyiaman Brentuo VI to represent the interest of Manhyia at the seat of government.

A medical practitioner by profession, Baffour Hyiaman Brentuo VI is a traditional ruler and a special aide to the Asantehene.

The head of the Manwere Division of the Kumasi Traditional Council is also the managing editor of the New Nation Times newspaper.

He is a Staunch Catholic, knighted to the rank of Past Grand Knight (PGK) of the Noble Order of the “Knights and Ladies of Marshall” Council 3 in Kumasi.

Mawerehene told the press when given the nod he would want to push for a law that would require all gold exported from the country to be refined.

He says the move will sanitize mining of the precious metal, reduce the effects of illegal mining and ensure more financial benefit to the country from the mining sector.

He is also looking forward to executing a Manhyia Palace idea of creating a modern Kumasi City, which he says will factor Nana Akufo-Addo’s one district one factory to create jobs.