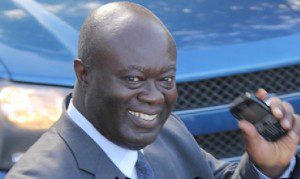 The defeated parliamentary aspirant for Asokwa, who is also a former MP for that constituency, Maxwell Kofi Jumah, was on Monday granted bail by a Kumasi Circuit Court  after he was accused of causing unlawful damage to electoral material.

The other accused person was his campaign manager, Richies Oscar.

They were both granted bail in the sum of GH?10,000 each with a surety.

Lawyer for the two accused persons, Kwame Osei Prempeh, a former MP and one-time  deputy Attorney-General, says his client has denied tearing the voters? register although he admits seizing it.

On Saturday June 13 during parliamentary primaries by the opposition NPP to elect parliamentary candidates for the 2016 elections, police in Kumasi arrested Mr. Jumah and his campaign manager for allegedly destroying election materials including the voters? register in the Asokwa Constituency.

He was said to have seized the ballot booklet from an Electoral Commission official and attempted to tear it on the grounds that the register had been manipulated to favour his female opponent, Patricia Appiagyei.

Mr. Jumah was handcuffed in the open and placed in custody on Saturday and spent the night in police cells at the Asokwa Police Station.

While in cells, the election which still went ahead despite a boycott by some of his loyalists, was declared in favour of his opponent, Patricia Appiagyei, who polled 326 votes as against his 158 votes.

He was arraigned in court Monday after the police granted him a police enquiry bail on Sunday.

If the court finds him guilty, he could face a prison term of up to two years, a fine or both.

Jumah served as a Mayor of Kumasi from 2001 to 2004 before becoming a Member of Parliament representing the Asokwa constituency from 2004 to 2008 within which period he was appointed a Deputy Minister of Local Government and Rural Development by former President J.A. Kufuor.

In 2008, his successor as Kumasi Mayor, Madam Patricia Appiagyei contested him and snatched the Asokwa seat from him.

The rivalry between the two became intense from then on as Jumah saw Appiagyei as a ?tormentor? especially as her first attempt at Parliament was at the Asawasi constituency in 2004 also in Kumasi, where she lost to the ruling National Democratic Congress (NDC).

Jumah accused Appiagyei of running away from the Asawasi constituency which was difficult for the NPP to win as it was a ?safe? seat for the NDC.

Jumah in 2012 tried a comeback but was rejected by the NPP delegates.