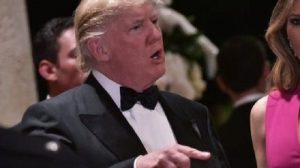 WASHINGTON — U.S. President Donald Trump on Friday spoke with Singaporean Prime Minister Lee Hsien Loong to discuss his upcoming meeting with top leader of the Democratic People’s Republic of Korea, Kim Jong Un.
According to a statement of the White House, Trump, in a telephone call, thanked Lee for his willingness to host his June 12 meeting with Kim. (US-Singapore-DPRK)
– – – –
ADDIS ABABA — The United Nations Office for the Coordination of Humanitarian Affairs (UNOCHA) on Friday said ethnic clashes in Southern Ethiopia have displaced more than 200,000 people.
UNOCHA said it’s working with officials from Southern regional state, home area of ethnic Gedeos and officials from Oromia regional state, home area of ethnic Oromos, to repatriate the internally displaced people, the office said in a statement. (UN-Ethiopia)
– – – –
MOGADISHU — The U.S. military said on Friday that it will investigate local reports that its forces killed civilians during an operation conducted in Somalia on Wednesday.
The U.S. Africa Command (Africom), which oversees American troops on the African continent, said its special forces, in an advise-and-assist capacity, partnered in a Somali-led operation to disrupt and degrade al-Shabab’s terrorist network near Bulcida on the outskirts of Afgoye in southern Somalia. (US-Somalia-Investigation)
– – – –
NAIROBI — The head of the UN Mission in South Sudan (UNMISS) on Friday called on cease-fire monitors to make public the reports on violation in order to end the continuous cycle of impunity by the warring factions.
Head of UNMISS David Shearer said the cycle of impunity will end if the Ceasefire Transitional Security Arrangement Monitoring Mechanism (CTSAMM) starts to make public its reports on violation amid surge in violence in the northern Unity, Jonglei regions and Equatoria region. (UN-Sudan-Cease-fire) Enditem