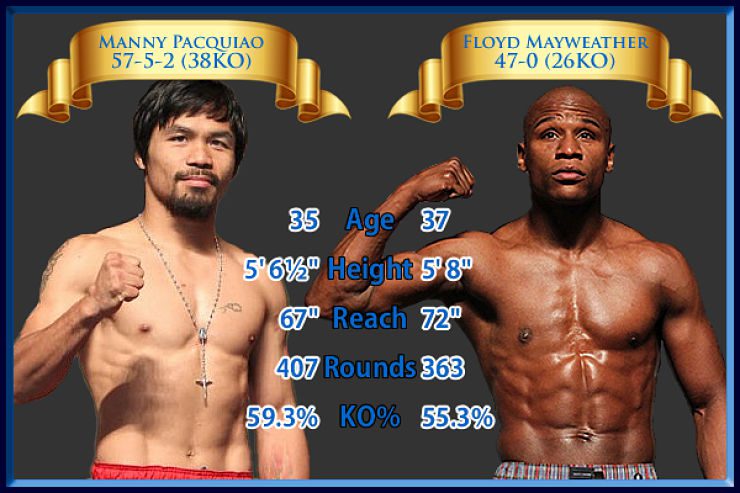 Floyd Mayweather and Manny Pacquiao weighed in below the welterweight limit Friday before a packed arena of screaming, singing fans anticipating the landmark bout. One day before Mayweather and Pacquiao finally meet in the richest event in boxing history, they took the stage in an MGM Grand arena filled with 11,500 fans enjoying the public’s best chance to see the fighters in person.
Pacquiao (57-5-2, 38 KOs) stepped on the scales first and weighed in at 145 pounds, two below the welterweight limit.
Mayweather (47-0, 26 KOs) followed and weighed in at 146 pounds.
Sections of the crowd roared and booed for both fighters, although the majority appeared to support Pacquiao. Mayweather was booed repeatedly when his image appeared on the arena scoreboards, but he also acknowledged his cheering section with waves and a raised fist.
Even an ordinary weigh-in turned into a hot ticket in boxing’s capital city because only about 500 tickets for the actual fight were sold to the public. The promotion took the unprecedented step of selling 10-dollar tickets to the weigh-in and donating the profits to charity, but secondary prices for the weigh-in seats topped 500 dollars on StubHub earlier this week.
The fans began arriving on the Strip on Friday morning, packing the MGM Grand’s parking garage and streaming into the casino from the street. A long line to get into the arena formed several hours early, and the first fans got into the building four hours before any fighters took the stage. Enditem