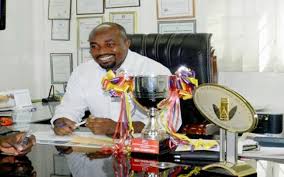 The La Town Park will soon take a new shape as Mr. Daniel McKorley aka McDan has promised to redevelop the field, fitted with flood lights and add other sports facilities.

Mr. McKorley CEO of McDan Group of Companies broke this news when he watched one of the exciting games at the Town Park during the McDan Peace Soccer Tournament. The game which ended 9-9 after penalties were taken had to be called off due to poor visibility.

He said the La Town Park which is located close to the La General Hospital which has been grassless for the past five decades but has produced great sportsmen and footballers has to be developed to change the landscape of La township.

He revealed that the decision to redevelop the park is a social responsibility that must be taken by someone who has love for community development, and he has decided to do it to help develop talents and promote peace, love and progress.
The multi-purpose sports field is to be constructed by L.A Robert Coleman, who owns a recreational astro turfed facility at Kotobabi, near Nima.

If the project comes up, it will add to the number of astro turfs in Accra after the Theodocia Okoh Hockey Stadium by the late President Atta Mills government, Tema Stadium by the Ghana Football Association (GFA), Kotobabi Community by Robert Coleman, Lizzy Sports Complex by Marcel Dessailly, Attram Visser Academy by Godwin Attram and Accra Academy by Asamoah Gyan.

President John Dramani Mahama recently commissioned a multi-purpose sports facility at Bukom and the people of Accra West are very happy, but another one at Accra East like what McDan projects should satisfy the people of La who are real sports enthusiast.