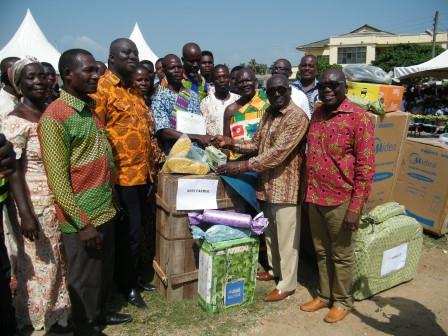 Mr Albert Okyere, the Ashaiman Municipal Chief Executive has called for strong and sustainable investments in the agricultural sector to create business opportunities.

He urged private investors to channel their resources into agriculture to promote local production of rice, maize, poultry, livestock, among others to create employment for the youth.

Mr Okyere made the call when he addressed farmers at this year’s National Farmers Day on the theme: “Farming for Food and Jobs” at Ashaiman on Saturday.

He encouraged the farmers to embrace scientific methods and appropriate technologies to ensure sustainable food production and security to enable the nation to meet its nutritional needs.

Mr Okyere said there was the need for appropriate measures to be taken to make agriculture attractive to the youth for them to spearhead the government agenda of “Planting for Food and Jobs” because the sector has been left in the hands of the old and the aged people.

The MCE assured farmers that the government would continue to put in place the right policies, legislations and incentives such as fertilizers at subsidised prices and to make agro-chemicals available at affordable prices to raise productivity, income and create jobs for the population.

He said the Assembly had put in place an Agricultural Sub-Committee to facilitate urban agriculture programmes in the Ashaiman Municipality.

Mr Okyere said the area had experienced outbreak of Avian Flu and African Swine fever within the year and advised farmers, especially those in poultry and pig industry to report immediately of any deaths of their stock to the relevant authorities for urgent attention.

He said a Municipal Taskforce had been put in place to monitor and report on any infestation and congratulated the farmers who won awards for their achievements.
GNA/Newsghana.com.gh