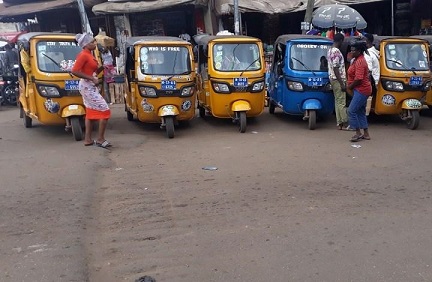 Mr. Kojo Acquah, Municipal Chief Executive (MCE) of Effia-Kwesimintsim Municipal Assembly (EKMA), has implored the support of Assembly Members to enforce the ban on the use of smaller tricycles, popularly known as “Pragya” in the Municipality for commercial use.

Subsequently, he has encouraged the assembly members to inform residents of their respective communities and also encourage them to comply until otherwise instructed.

Speaking in an interview with the Ghana News Agency (GNA), the MCE stressed that the ban remained in force until further directive from REGSEC and that anyone who flouted the directive would have their “Pragya” confiscated permanently by the Assembly.

The Assembly through a consultative meeting with the members of the District Security Council (DEGSEC) banned the use of the tricycles in the Municipality for commercial purpose.

The decision, follows a directive from the Western Regional Security Council (REGSEC), aimed at safeguarding the safety and well-being of residents within the Municipality.

Mr. Acquah said the safety and well-being of residents within the Municipality remained his utmost priority, and that the action to ban the tricycles formed part of a broader effort to check and reduce road accidents by providing safe transportation services to residents.

The MCE noted that riders of the tricycle grossly disregard road traffic and safety regulations, thereby posing danger to their lives and that of other road users.

He said security, peace and stability of the Municipality were of utmost concern to his administration and for that matter, he would continue to offer the necessary support to all security agencies in a way that would make them effective and efficient in responding to emergencies as and when they occurred.

Mr. Acquah said the municipality was relatively calm though some few crime incidences were recorded and stressed that it would continue to provide a conducive atmosphere for businesses to thrive.

He expressed worry about the recent incident of preventable disasters and pledged to do his best to prevent future disasters.

Mr Acquah mentioned some of the disasters to include flooding at Unicom Hostel and fire outbreaks at Allah Wahid Mechanic Shop, God with Us Welding Shop and Effiakuma New-Site (F-Compound) where fourteen (14) people were badly affected though no casualties were recorded.