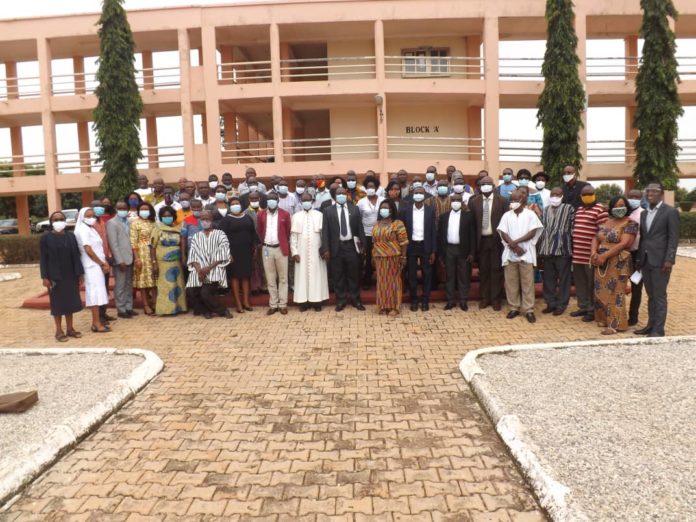 The Marian Conflict Resolution Centre (MCRC) at the Catholic University College of Ghana (CUCG) has since 2011 trained about 400 certified mediators and 60 arbitrators across Ghana.

At its establishment in 2011, the professional mediation training idea was brought to bear because Centre’s mission was to passively affect the nation’s alternative dispute resolution (ADR) system.

Dr Vida Korang, the Executive Director of the Centre said when she spoke at the opening of this year’s professional mediation training on Monday at Fiapre in the Sunyani West Municipality of the Bono Region.

The five-day programme was attended by more than 65 participants of diverse backgrounds, including; traditional rulers, religious leaders, educationists, public and civil servants from different parts of the country.

She said the MCRC therefore decided to train more professionals who would be competent, certified and licensed mediators and arbitrators to support the young ADR practice in Ghana to help resolve conflict situations around them.

Due to that, there were series of training programmes that the Centre was undertaking annually to help strengthen the ADR practice in Ghana.

She urged participants to be ambassadors of ADR practice by taking the training as “a great opportunity” to use the skills they acquired to help in resolving conflicts at wherever they found themselves.

“Where conflict thrives, you can coordinate with authorities to set up conflict resolution groups to deal with all situations that might arise at that level and in so doing the gospel of ADR will be heard by all”,she implored.

Most Reverend Matthew Kwasi Gyamfi, Catholic Bishop of the Sunyani Diocese in a remark said conflict and disputes were challenges that were confronting the human race since time immemorial.

The important thing however, “is not always focusing on the negative sides of conflict, but the positive aspects” and how to harness something good out of that to be able to restore peace for the advancement of the society’s progress, he emphasised.