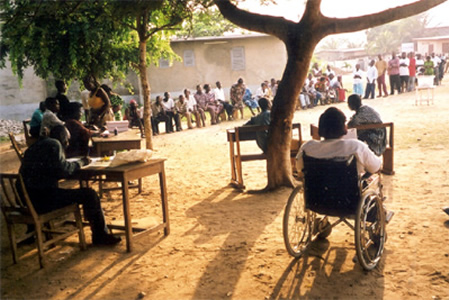 Five Municipal and District Assemblies in the Volta Region have begun the involvement of Persons with Disabilities (PWDs) in their local governance system.

The initiative is to encourage active participation of PWDs in decision-making processes and to ensure that concerns of PWDs were addressed effectively at the local level, Mr. Francis Asong, the Executive Director of VOICE Ghana, a disability focused non-governmental organization told GNA.

He said his outfit supported fifteen disability self-help groups in the municipalities and districts to build the capacity of thirty influential community members as “Inclusion Ambassadors”.

Mr. Asong said the “Ambassadors” were expected to advocate for the rights of PWDs to be upheld in their communities and ensure that PWDs were included in all development processes.

He said a Disability Caucus was also being formed to act as social groups to promote the interest of PWDs at assembly meetings and local policy decision making processes and lauded the assemblies for accepting the roles of PWDs in community development.

Mr John Nanka, the Chairman of the Ghana Federation of Disability Organisations in the Nkwanta North District, said the Assembly was making public facilities accessible to PWDs and also incorporating development priorities collated from PWDs into the Assembly’s Medium Term Development Plan for 2018-2021.

The “Inclusion Ambassador” initiative is being facilitated by STAR-Ghana with funding from UKaid, DANIDA and the European Union, with the Volta Regional Council of