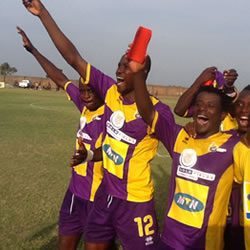 Medeama through to the playoff round of the Confederations Cup

Ghana FA boss Kwesi Nyantakyi is backing Medeama SC to go all the way to win the CAF Confederations Cup in just their debut campaign.

The Yellow and Mauves are through to the final qualifying round of Africa?s second tier competition following their 2-1 aggregate win over Zambian club Zesco United.

Medeama is however likely to draw any of the elite clubs in Africa who dropped out of the Champions League in the playoff round.

GFA boss Kwesi Nyantakyi however believes the Tarkwa-based club are strong enough to continue with their already impressive campaign in the Confederations Cup.

?I have been very impressed with Medeama?s performance in Africa,? he told Metro FM.

?They need the collective support for Ghanaians and I believe they can go all the way to win the cup because they have a good team.?

Medeama will be facing Congolese club AC Leopards in the playoff round of the Confederations Cup.