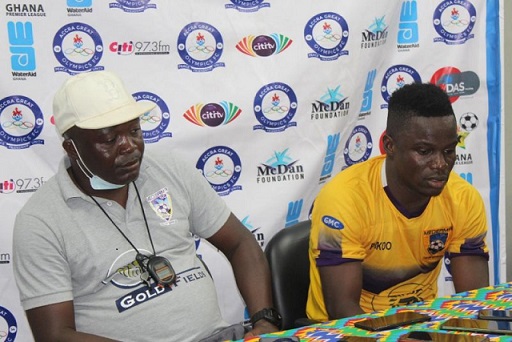 Burkinabe forward Ahmed Toure is hopeful of getting more goals for Medeama following his return to the Ghana Premier League (GPL).

The 2010/11 GPL Player of the Year marked his debut for Medeama with a brace against Elmina Sharks in a match-day 15 encounter.

According to the 33-year old striker he would get more goals but stated the need for hard work to be prolific in front of goal.

“We are working together as a team and definitely the goals would come. This is my third game and I have two goals which is not bad for a striker but would work hard to score more goals for Medeama,” he said.

Speaking about their 1-0 loss against Great Olympics in a match-day 18 encounter, Toure said:”It was a good game against Olympics, they took their chance and scored a goal in the first half but we had a good second half.

“We have two games at home and we would work hard to get the six points,” he said in a post-match presser.

Toure returned to the GPL after ending his stay with Guinea side AS Kaloum and has also had spells with Asante Kotoko, EL Gouna and KSC Lokeren in past years.