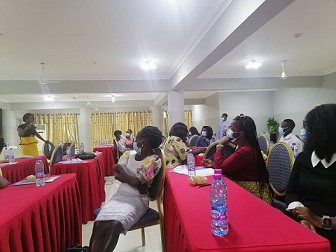 The Media Foundation for West Africa (MFWA) with support from the Embassy of the Kingdom of Netherlands in Ghana has organized a day’s training workshop for selected journalists and gender based civil society organisations within the Western Region in Takoradi.

The workshop sensititized participants on Women’s Right Online as well as digital Literacy.

The Head of Institutional Development at Media Foundation for West Africa (MWFA), Mrs. Dora Mawutor, said creating content on social media was not just a privilege but one that came with responsibilities and must therefore be guided.

According to her, there were digital rights and responsibility that an individual must be mindful to avoid abuses and sanctions.

Mrs. Mawutor said the proportion of women using internet globally was 48 percent as against 50 percent men, with 21 percent men likely to be found online than women.

She said although the gender gap was improving, there was still ample room for improvement, citing lack of affordability, and inadequate internet space as some main challenges faced by women.

On the issue of internet abuse against women, Mrs Mawutor said it was a serious issue that needed to be dealt with.

Mrs. Mawutor also advised women especially girls to be cautious of the content they posted on social media platform as it was not easy to be erased once posted.

She asked that strong passwords were created on every internet account and avoidance of the use of free or public WIFI.

Mrs Mawutor also encouraged women who have been victims of cyber bullying to speak up about it.

He added that, social media users should consciously gather evidence of internet abuse to back their reports.

Mr. Quayson noted that it was imperative for the internet to be safe to encourage more women to patronize the internet, while ensuring that websites visited were secured before accessing it.

Madam Benedicta Quarshie, a Journalist with the GBC, noted how insightful the information provided would aid in her field of work.

She was however not happy that women lagged behind in the use of the internet.

“This education is very timely for me considering the fact that cyber bullying has become rampant. With the education received, I am better placed to take some preventive measures against online abuse and be more security conscious”.