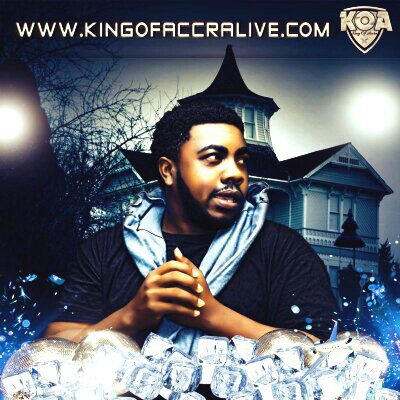 By Oral Ofori
?At age 8, I was in my church choir where my older brother would occasionally write songs for me and my other siblings to sing at church. When I got to Junior high school I was performing songs by known artistes like Obrafour of Ghana and Tupac at school entrainment activities.?
This is?Nii Kommetey Commey?speaking of how his passion for music evolved as a child to what it he has made him become today??a beats maker and rapper. Prefering to be identified as the ‘King of Accra’,?Nii was mentored and schooled by Hammer of the ?Last Two Music Group?; one of the greatest producers in Ghanaian music history.
Armed with skills obtained from his mentorship by Hammer and other self taught knowledge he had acquired over the years on the basics of production, the King of Accra started networking with people who had superior knowledge in the music production business from whom he learned a lot more valuable tricks of the trade.
?
Then in 2008 he started putting his acquired skills to the test by producing and singing with?Sarkodie, one of the most prolific hip hop recording artiste from Ghana. ?I worked on his latest album ‘Sarkology’ where I produced the track 10 on that album titled ‘You Already Know’, prior to that we have worked on countless hits like ‘Daabi’, ‘Bye bye to poverty’, ‘this game’, ‘free night call’ and over a dozen other unreleased tracks.”
?
?
?Sarkodie is also featured on some of my singles which include the hit track ?let’s go? and also ?Mogbe? which features Nigerian rapper, singer and sound engineer Big Klef of WSAMG. I have also worked with?MOBO award winner Samini?on his Global Beats Mixtape on songs like ?Solo Artist?, ?pressure girl? etc.?
?Other artiste I have done production for in Ghana are Trigmatic, Manifest and Dadie Opanka? says King of Accra who has also recently produced a feature for UK based reggae musician Empress Tetteh which he says offered him “a great opportunity to reach audiences in other parts of the world.?
?
Being alone in the studios brings out his best creative genius because King of Accra says he has found inspiration to work effectively in solitude. There are other times too when being amidst other talented artists and producers have been a great motivation for the young producer who believes he could even gain inspiration from the sounds made by crickets at nights, the chirps of birds during the day and literally anything or person that ignites creativity in him.
?
?
?My dream is to become not just a celebrated musician, but also a celebrated beats maker that will be able to leave a mark on the world through my music and artistry. A mark so deep it will enable me fulfill my dream of shooting Accra and Ghana to the world and make the world interested in the relevance of Ghanaian and African music? this, according to King of Accra would indeed make him feel fulfilled.
?
Besides himself, one other thing this producer-musician wants to bring attention to is the issue of the copyright act of ?the Ghana music industry and the need to address its ineffectiveness to guard against matters like royalties that go unaccounted for.
“Poorly protected intellectual properties among other mismanagement have left many great veteran musicians living poor today. This leave the younger ones feeling unsupported for lack of interest on the side of government and the private sector to invest in the power of music and its revenue creating power. I hope to change this through my work by becoming a voice of reason” King of Accra says.
?
King of Accra is very passionate about working hard for what one believes in. He knows in a matter of time his moment to be where he really wants to be will come, until that time arrives, he will keep doing what he does best, writing and producing music while adding his voice to the call for change in the music industry especially in Ghana. Visit him at?www.kingofaccralive.com?and dive into his music.