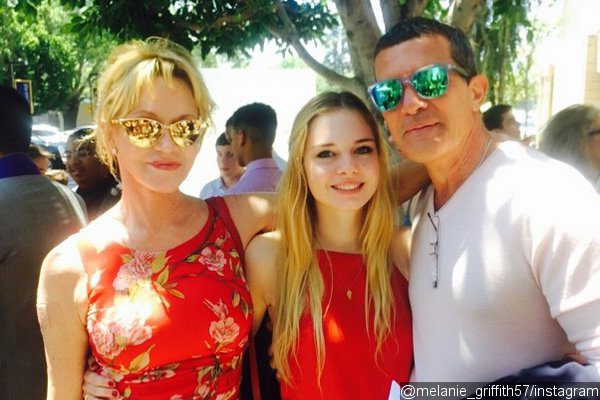 Melanie Griffith and her ex-husband Antonio Banderas reunited at their daughter?s Stella?s high school graduation on Sunday, June 7. Melanie took to Instagram to share some photos from the celebration. One of the photos showed the ?Working Girl? actress posing alongside her former flame.

In the photo, Melanie, Stella and Antonio posed arm-in-arm. The 57-year-old actress wore a red sleeveless floral dress and gold sunglasses, her daughter donned a red gown while the ?Spy Kids? actor sported a white long-sleeved top and blue sunglasses. ?Mama, Stella and Papi. Our angel is amazing. Beginning the next chapter of her life! Freedom!!? she captioned it.

She also posted a photo of her hugging Stella. In the photo, Melanie noticeably covered her ?Antonio? tattoo with bandage.

Melanie added a photo of Antonio hugging Stella along with caption, ?Father and daughter celebrating at Bacclaureate luncheon! So sweet!!?

In another picture, Stella could be seen posing alongside her father and her family. She wore a black-and-navy dress, while her brother Alexander and father Antonio donned suits.

Melanie, who filed for divorce from Antonio in 2014, also shared a photo of her posing with her three children including Dakota Johnson.