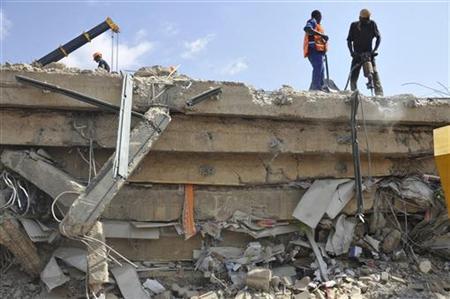 Melcom Group of Companies has descended heavily on state agencies for failing to release reports on the collapse of its shopping Centre at Achimota, which occurred on 7th November 2012.

Addressing Journalists at a press conference in Accra, the Director of Communications Melcom Group of Companies, Mr. Godwin Avenorgbo, said five years now, not a single investigative report on the collapse of that property (owned by Nana Kwesi Boadu, Director of Kinsadus Company) has been released.

“We call upon all agencies who conducted investigations to release reports that hopefully will address following concerns:

• Was the construction covered by a building by permit by the relevant state agency?

• Soil test conducted before such a huge 6 story building was put up?

• Was a qualified structural engineer contracted for the project?

• Were the building materials used of the right specification and mix?

If the Investigative reports answer NO to any or all of these questions , then the obvious cause of the sudden collapse of the building was improper , shoddy and haphazard construction without permit , supervision and technical expertise”, he stated

It is very disappointing that in the face of these obvious failures, the owner of the structure that collapsed causing death, injury and loss of business has not been brought to book under the laws of Ghana.

According to him, Melcom as an Investor operates within the Laws of Ghana and they expect that the same Law should protect their investment as security and incentive for growing their business for the larger benefit of the economy.
This he said, the support and protection that the Local Investor enjoys invariably serves as a catalyst to whip up interest in External Investors. Five years, is obviously too long for any business house or entity which suffered such huge losses in human and material resources to look on helplessly.

While the inaction of state agencies allows the culprit freedom without any penalty to serve as a deterrent. If the Regulatory arms do not take such matters seriously then we should not be surprised if such huge levels of negligence cause further avoidable loss of life and property.

14 residents and businesses to appear before court in La

Some global food brands are failing animals according to new report