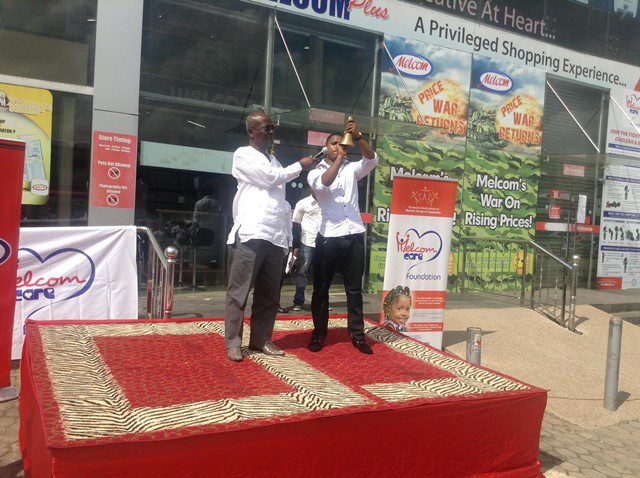 ??..In honour? of victims who were trapped in? collapsed shop Melcom Groups of Company Ghana, has held a 2nd Melcom? memorial day in Accra to commemorate? the tragedy that before befall? one of their branches at? Achimota a suburb of Accra on the 7th November 2012.
The Director of Communications Mr Godwin Avenorgbo, who was speaking on behalf of the Group? Chairman Mr? Bhagwan Khubchandani? during the memorial service? noted that the tragedy that befell the company two years ago in which they lost 13 well trained and dedicated staff and other? 33 persons who suffered various degrees of injuries was? an event which will always remain the hearts of all and sundry.
According to him even though some of the injured staff were so traumatized they still moved on in? either to further their education and seek other vacations; adding? that? majority have remained with Melcom Ltd and are gainfully pursuing their vocations with other branches of Melcom Ltd.
” Today ?we are grateful to God for His mercies and can proclaim that through all the changing scenes of life, in trouble and in joy He has not forsaken us and to Him we give all praise , all honour and glory.
To the dead: We honour your memory?and we thank God for giving you a place of rest where you will no longer know pain. To the living, we thank you for your confidence in Melcom Ltd and your continuing service; even as we thank God for saving your precious lives”
This he said, the Company will re-affirm its commitment to sponsoring at least one child of each the heroes up to the highest level of education they can attain.

“We also commit ourselves to continuing to offer scholarships to children of our serving? staff who so qualify under the competitive Melcom Education Scholarship Scheme from primary to tertiary level” he added.

He said in 2013, they awarded ten?scholarships to staff children at the start of the exercise. This he added that approval has been given for additional ten education scholarships? for children of Melcom staff nationwide. ?We assure our cherished?customers that structural integrity tests by accredited?structural engineers have been conducted on all rented buildings housing Melcom shops and our buildings to assure the safety of our customers and staff nationwide ” he assured.
This he said, they ?have concluded the payment of compensation as determined by the medical authorities and labour office under the workmen’s compensation act to all staff who were in one way or the other ?affected by the accident of November 7, 2012. According to him, Melcom will soon re- establish an Achimota Branch of Melcom as soon as they succeed in the search for land or building that can house a new shop.