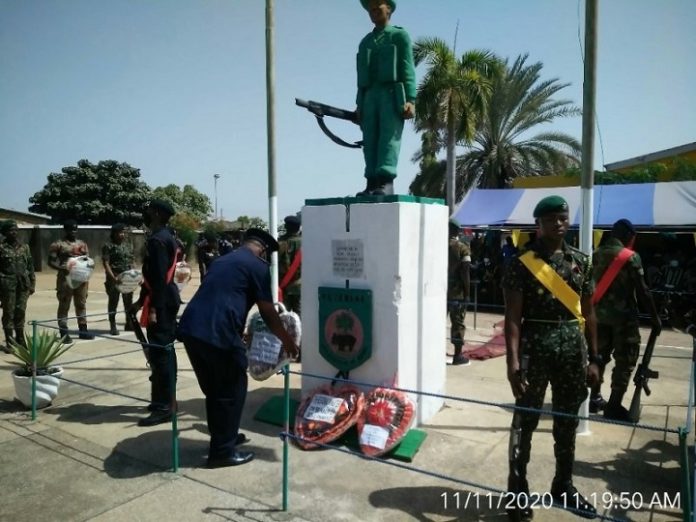 A solemn memorial service was held on Thursday at the Cenotaph, Takoradi in the Western Region to commemorate the 76th Remembrance Day celebration.

It was to honour members of the Armed Forces and other security agencies who died during the first and second World Wars.

The Remembrance Day, though an annual event held by all Commonwealth member states to commemorate the end of World War I on November 11, 1918, some other non-Commonwealth countries also observe the day as a tradition inaugurated by King George V in 1919.

The ceremony held in Takoradi was interspersed with solemn tunes from the Ghana Air Force Regimental band.

The siren was sounded by the Harbour-master which was followed by the reading of the Biyon verse. A call to salute was observed by all officers from the security agencies after which two minutes of silence was observed for the departed veterans.

This was followed by the Reveille, flag hoisting and the laying of wrath.

The final wreath was laid by a 96-year-old veteran and a survivor of the Second World War, Ex-Bomarde Adoquaye Francis on behalf of Expatriates who died during the wars.

The Regional Minister and the other dignitaries present later interacted with the Veterans where they appealed to the Government to increase their pension payment.

Speaking in an interview with the Ghana News Agency (GNA), Ex-Fleet Cheap Party Officer, Abubakar Ahmed Tijani, Western Regional Administrator of VAG underscored the importance of the day and said soldiers would continue to fight to ensure peace in the World.

In that regard, he added that society must give back to veterans for their sacrifices by supporting them to live comfortable lives.

He recounted the poor conditions of some veterans and appealed to philanthropists and the general public to go to their aid.