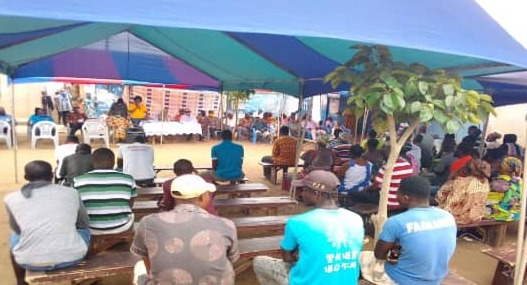 Pastor Philip Ackumey, Resident Pastor for the Apremdo District of the Church of Pentecost (CoP) in the Western Region has called on men in the country to become agents of change and transformation in their communities.

He said, “in the pursuance of righteousness and justice in society, we must champion the cause of the vulnerable and the marginalised and become responsible to our community if we want to play our role as effective gatekeepers”.

Pastor Ackumey who doubles as a National Executive Member of the Pentecost Men’s Ministry (PEMEM) made the call at the climax of the PEMEM Week Celebration in Takoradi.

Speaking on the theme, “Possessing the nations as an effective gatekeeper”, he quoted from 1John 5:19 which reads thus, “We know that we belong to God even though the whole world is under the rule of the Evil One” and said men should be active in prayer to redeem their families from the grips of the enemy.

He further called on men “to be aware that they have been put at the war front and for that matter must lay down their lives for the people at the gate which they keep for peace and protection”.

According to him, the role of the gatekeeper at home depended on both man and woman because the woman was to complement the efforts of the man and to make him an accomplished person.

Pastor Ackumey urged all fathers to also learn to play the role of wives in the home as caretakers and should be the first to wake up and the last to go to sleep, keeping watch and managing the home as a watchman and a gatekeeper.

He stated, “when men fail to keep the gate properly, their children will rise against them, and that will as well breed confusion, chaos, and insubordination at home”.

He pleaded with men to learn to appreciate their wives and children and also learn to show concern and adjust to the way things were done by women and not trying to superimpose their decisions on the family.