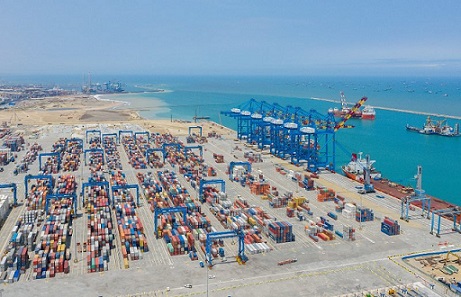 The Land Works covers 4.2 ha right at the terminal’s waterfront and stretches the MPS Terminal 3 quayside to 1,400m at a dredged level of -16.90 m CD.

Mr Mohammed Samara, Chief Executive Officer of MPS told the Ghana News Agency that MPS is optimistic that the investments made in the facility would make Tema a force to reckon with in the transshipment business.

Mr Samara added that it would also position the country on a sound and solid footing for effective trading under the African Continental Free Trade Area Agreement (AfCFTA).

He said, “the fourth berth has to come, this would be mainly the next step that we would take to secure the transshipment hub concept in Tema Port and to add capacity to cater for the AfCFTA because the continental trade needs infrastructure and connectivity.”

Mr Michael Luguje, Director General of the Ghana Ports and Harbours Authority (GPHA) on his part said the provision of the berth four at the terminal consolidates Tema’s position as a strong player in maritime trade.

Mr Luguje said it was significant because Ghana had become a center of attraction and her transshipment growth by almost 28 per cent in 2020.

He added that this year, they were already seeing significant growth and bigger vessels were calling at the country’s ports, “which means the trade is happy about the developments, the efficiency, the facilities available and Ghana’s safe economic environment”.