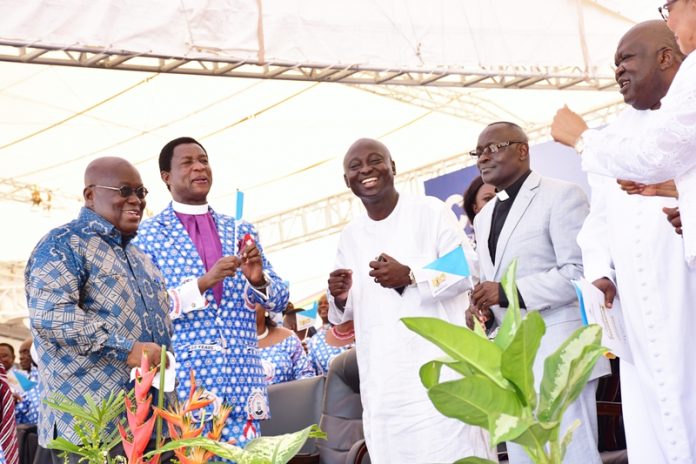 Apostle Dr. Stephen Kwame Amoani, Chairman of the Christ Apostolic Church International (CACI), has reminded pastors that ‘the Message of the Cross’ is salvation for people to live godly and responsible lives; but not the accumulation of earthly wealth.

He, therefore, urged them to shun the monetisation of the word and the insatiable desire for wealth and power, which was gradually creeping into the Church.

He said the occasion would also be used to identify its weaknesses and strengths as well as continue to submerge the church in strong biblical teachings in the coming years.

He paid glowing tribute to the Founder of the Church, Apostle Peter Newman Anim, who is acknowledged as the ‘Father of Pentecostalism in Ghana’ for his selflessness and dedication to the cause of Christianity.

”I am happy that a small prayer group, which began at Asamankese in the Eastern Region by Apostle Anim in 1917, has blossomed into many churches.”

He said the impact of Apostle Anim and other dedicated leaders had led to the growth of the Church, which has more than 1.5 million members with more than 5,087 branches world-wide. It has 1,086 work force.

Apostle Dr Amoani, who is also the Vice President of the Ghana Pentecostal and Charismatic Council (GPCC), said the Church would continue to partner the State in advancing national socio-economic development.

He gave the assurance that the fire that was set ablaze by the Founder continued to live on, saying, “This demonstrates that Jesus Christ is real and alive.”

In a fraternal message, Apostle Professor Opoku Onyinah, President of GPCC, noted that 100 years in the life of any organisation, especially a church planted for the purpose of propagating the unadulterated gospel of Jesus Christ, as well as helping to meet the needs of the deprived and vulnerable was worth celebrating.

Apostle Prof. Onyinah said: “Your impact in the country has been felt through the transformational leadership you have provided your congregation and how well you have been able to spiritually managed crises over the years.”

The Most Reverend Dr Charles Agyin – Asare, Presiding Bishop of the Perez Chapel International, said: “As pioneers of Pentecostalism in Ghana, you set the pace for the Church through your holy spirit-empowered preaching, salvation and manifestation of divine power”.

Rev. Dr. Victor O. Abbey, Acting Moderator of the General Assembly, Presbyterian Church of Ghana, noted that: “These celebrations offer us the opportunity to give thanks to God for making the vision of Apostle Peter Newman Anim a reality because like Paul, he was not disobedient to the heavenly call.”

Apostle Dr Michael Nimo, a former Chairman, CACI, led the Church to pray for the President and the nation.
GNA/Newsghana.com.gh