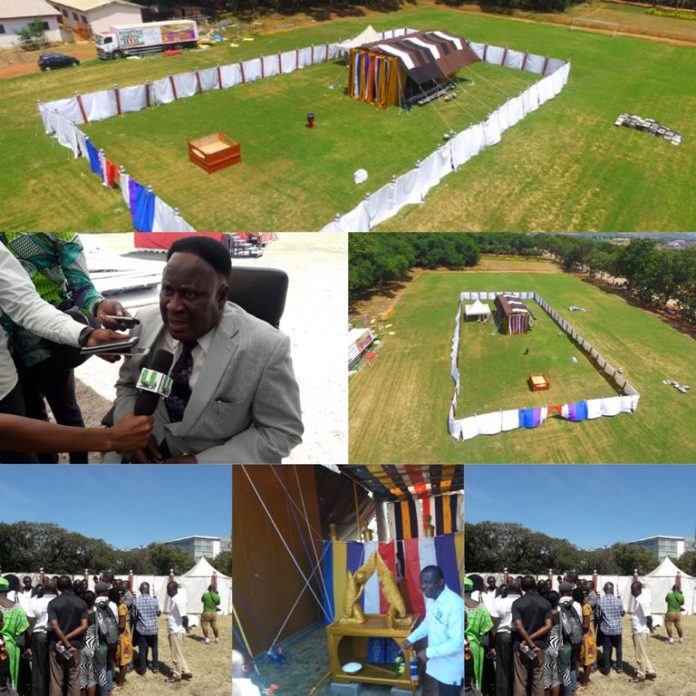 Rev. Andrews Lawrence Ewoo, a retired Pastor of the Seventh Day Adventist (S.D.A) admonished Christians to worship God and not pastors who have assumed the authority of Christ and as the object of worship.

The man of God, gave the advice during the launching of the Messiah’s Sanctuary in Accra over the weekend.
Rev. Andrews Lawrence Ewoo, also expressed worry about the manner in which some pastors deviated from preaching the true Gospel.

According to him, such practices did not augur well for Christianity and not a good mark of leadership.
This he said because they are only in pursuit of money, instead of preaching the truth and the message of repentance and hard work.

The renowned man of God, therefore admonished all and sundry especially the Christians to focus on Christ Jesus who is the savior of the world.

Throwing more light on the essence of the Messiah’s Sanctuary, he noted that it will serve as a great evangelistic tool for a church’s outreach programme. And also draw mankind to God.

The Messiah’s Sanctuary tour is broken into 9 sections, each lasting about 15 minutes, Groups as small 1 and as large 50 are guided by a tour through the symbols and meanings of the Sanctuary.

The Messiah’s Sanctuary whole purpose is centred on one main theme, and that is the Gospel in symbols. The amazing illustration of the plan of salvation shows how it was demonstrated in ancient Israel 3,000 years ago.

Thousand have taken the Sanctuary tour and enjoyed the information about the plan of salvation.
According to him, the Messiah’s Sanctuary, where God dwelled was fully characterised by Christ’s embodiment saying that, “the entrance is Christ, the altar of sacrifice is Christ, and the laver is the baptism of Christ and of the Holy Spirit… is all about Christ”.

This he said, the the Sanctuary narrated a story about God’s divine intervention to rescue man destined for destruction adding that the intrusion of sin in the Garden of Eden brought a separation between man and his maker as stipulated in Isaiah 59:2.

Sanctuary had two divisions; thus the inner and outer court with the inner court divided into two apartments – the Holy Place and the Most Holy place.

He said both courts were surrounded by a tent of white linen and a single gate which was decorated with a curtain of different colours thus purple, blue, red and white noting that “all these colours were symbolic representing royalty, the law of God, the blood for propitiation of sins, and the righteousness of God respectively.

According to him, in the outer court, they were two objects thus the Altar and the laver saying, “The altar was where sacrifices were made and the concept of ‘saved by grace through faith and justified without the law’ was brought to bear on the sinner.

“A sinner who comes with a lamb in recognition of his transgression against God’s law comes to confess over the lamb who represents Jesus Christ, the Saviour (John 1:29) takes the sins, offers grace to the sinner and thereby justifies him unto righteousness, the sinner is saved from the penalty of sin without the law but by grace through faith.”