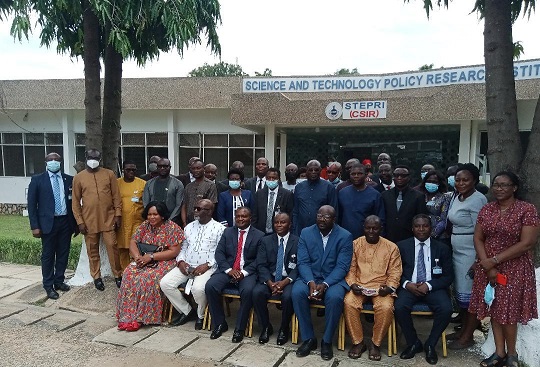 Welcoming participants to the session, Professor Paul Bosu, Deputy Director-General of CSIR, said the collaborative meeting was very important as it would help produce a roadmap towards achieving Ghana’s national objective of effectively financing science development.

He described the interaction with the legislators as historic and said it was going to go a long way to enhance science and research for rapid national economic growth and development.

Dr Emmanuel Marfo, Chairman of the Parliamentary Select Committee of Parliament, highlighted the need for a national framework to assess and interrogate the government’s commitment to financing science and technology.

Ghana is expected to commit at least one per cent of its annual Gross Domestic Product (GDP) to financing research and development, but the chairman noted: “When you look at the budget we give you, you will see that there is a big difference between policy intent and policy implementation.”

He said an analysis of the budget given was something around 0.3 or 0.5 of GDP, adding: “We need to be progressively assessing contributions of government to science and technology and be talking about it until politicians come to appreciate that we are not making progress.”

“We have to take this issue up and also make sure we have a kind of framework that allows us to track this kind of commitment, interrogating government commitment to funding science and technology.”

However, he said MESTI budget for 2020 improved and was far better than the previous years, stressing: and that showed that some progress had been made.

Dr Marfo also emphasised the importance of helping to bridge the science-policy gap, saying a lot of things were going on within the policy space and in the research space that has not been bridged, quizzing: “At what point are we merging so that politicians can appreciate and be talking about it.”

He called on Ghanaian scientists to help the government by providing rigorous analysis and data, and for parliamentarians to have a kind of framework to work with and for advocacy.

Mr Ebenezer Tei Larbi, the Ranking Member of the Committee, noted that investment in science and technology was expensive just as democracy, saying: “If we believe in science processes and actions for development, it must be supported.”

He called for more resources to be pumped into the science and technology and trigger a national conversation around it, adding: “Today, we talk about digitisation, but somebody put his money into it and today we all have computers and laptops, it is either we go for it or we go for it.”