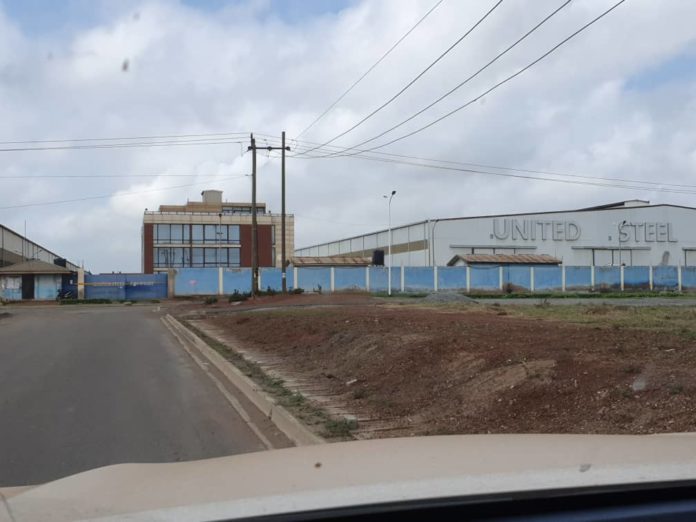 The Ministry of Environment, Science, Technology and Innovation has stop United Steel Company, a private steel manufacturing company, and some others from operating unless they provide a roadmap to address their poor pollution management.

The others are, Rider Steel Company and Success Aluminum Limited all in the Free Zones Enclave, whose pollution was affecting other business operators in the catchment area.

Professor Kwabena Frimpong-Boateng, the Sector Minister, last Tuesday gave the companies a one-week ultimatum to provide the Ministry with a roadmap to address the pollution challenges, which posed a threat to human lives.
Prof Frimpong-Boateng gave the order after paying an unannounced visit to the premises of the companies.

In a follow-up visit by the Ghana News Agency (GNA) to the United Steel Company, it realised that the company’s entrance had been close with reflective barricades with a government seal to prevent entry.

Also, at Success Aluminum Limited and Rider Steel Company, the GNA realized that they were also not operating.
Professor Frimpong-Boateng said failure by the companies to sit with the Environmental Protection Agency (EPA) to draw a workable roadmap would lead to severe sanctions, since it would not be prudent to allow such degradation in the catchment zone.

The Minister expressed disappointment at the level of pollution the companies spewed into the environment as dark smoke was seen billowing with metal dust, virtually choking and reducing visibility on the factories premises and its environs.

He said his outfit had received several reports from other companies in the enclave on the consistent and reckless manner in which these companies were emitting harmful gases into the atmosphere, which informed his action to pay the surprise visit after some officials from his outfit had confirm environmental threats posed by the pollutants.

He said it was urgent to get an outline from them on how they were going to mitigate the threat from their operations as bad smoke was being emitted from their chimneys, stressing that he also observed during his rounds that the chamber for the melting of the metals in one of the companies was faulty.

The Minister reminded the managers of the companies that government would not compromise on pollution of the environment and the health of workers and other third parties who would be exposed to such dangerous emission, adding that the volume of fumes and metal dusts in and around the company could lead to lung infections among the workers.

The Minister also visited MND Metals Company Limited also within the Enclave which happens to be one of the entities at the receiving end of these pollution.