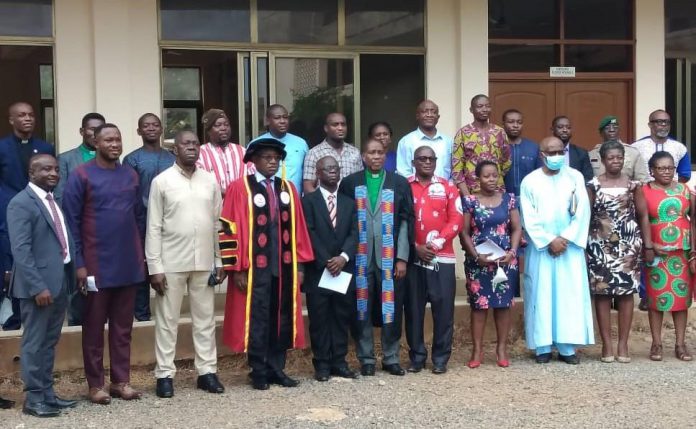 The Methodist University College of Ghana has reminded prospective students that the institute is a faith-based establishment which enforces Christian principles and values.

“Even though students are allowed to exercise their rights, they are expected to do so within the confines of university’s rules and regulations and Christian’s values.

“We do not compromise on issues of morality; we have zero tolerance for any form of misconduct-pilfering, use of abusive language, the use of fists to settle disagreement, promiscuity, drug abuse, occultism amongst others,” Professor Akwesi Asabere-Ameyaw, President of the University has stated.

Prof Asabere-Ameyaw made the remarks at the 21st matriculation ceremony of the University College at its Tema Campus, where some 175 students were officially inducted as Junior Members of the University.

He cautioned the students admitted to avoid all forms of indecency as they remained students of the institution.

“Be modest and decent in your dressing; and not that wearing tattered trousers and shorts for both ladies and gentlemen in the name of fashion, is not permitted on any of our campuses.

“Do not cheat during examinations or do someone’s academic exercise on his or her behalf and do not copy a colleague’s assignment,” he further advised, adding that the purpose of such assignments, class exercises, quizzes and examinations were to help develop their skills and to measure the academic progress,” he said.

In accordance with the mission of the University to ensure an all-rounded development of the student- mentally, physically and spiritually, on the basis of Christian principles, it made provision within their academic schedules for worship services.

According to the President, their goal as an institution of higher learning was not to help students to acquire certificates for enhanced salaries or to gain employment, but to change their total outlook, commitment to duty, effectiveness as professionals and attitude to life.

He called on the students to honour the tenets of their matriculation oath and be guided by the rules and regulations thereof, adding that, ultimately, the students needed to demonstrate a high sense of self-discipline towards their studies in order to be high achievers.

The Most Reverend Professor Paul Kwabena Boafo, Presiding Bishop of the Methodist Church of Ghana, said the training of the students would not only focus on academic work.

He said character formation would ensure that, after graduation, the students would be responsible citizens who would contribute to national development in integrity and patriotism in a result-oriented manner.