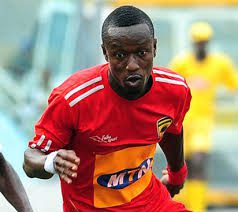 Kotoko midfielder Michael Akuffo has revealed the constant criticism of the squad will spur them to retain the Ghana Premier league crown.

The 3-1 win at Bechem United on Sunday has given the side some breathing room following recent slip in form.

The appointment of David Duncan has sparked a wave of competition in the team, leading to their heroics at Bechem over the weekend.

Kotoko have catapulted to 8th on the league standings, thanks to boardroom points and the club?s former captain insists criticism will spur them on.

?People criticising does spur you on,? Akuffo said. You are always going to get critics.

?We are at a massive club here at Kotoko and if things aren?t going as well as they should be, then there is always going to be people wanting to have a dig and a pop at you.

?The win at Bechem United will spur us on. We have been well aware of the criticism we have had.

?We are professionals and we are in a job where people have an opinion about you and they are entitled to it and we just have to get on with it.

?People can assume and predict and it is up to us to prove them all wrong.?

The Ghanaian champions will next host Liberty Professionals at the Baba Yara stadium before hosting Algerian side MC El Eulma in the reverse fixture of the CAF Champions League.