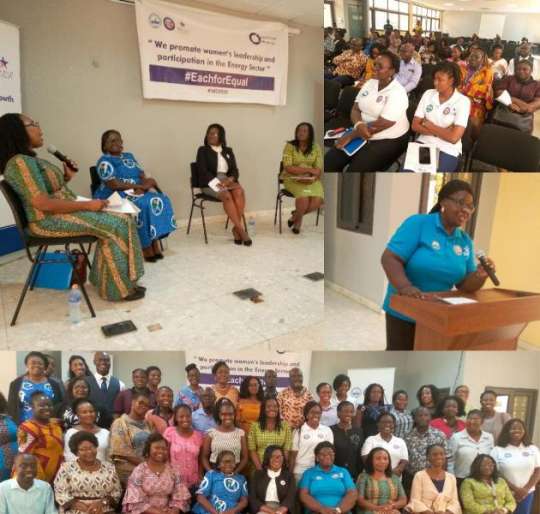 The Millennium Development Authority (MiDA) and Women in the Energy sector have called on all organisations and offices to develop sexual harassment policies to deter both males and females from harassing their junior officials at work.

This they argued was due to the rampant occurrence of gender inequity acts in offices with lack of courage on the part of victims to report the offenders to higher authorities.

The call was made at a workshop organised by MiDA as part of its activities to commemorate the 2020 International Women’s Day on the theme, “Increasing Women’s Leadership and Participation in the Energy Sector” and the global theme, “EachforEqual”.

Dr Cherub Antwi-Nsiah, the Director of Gender and Social Inclusion, MiDA said the policy when developed would instill confidence in junior officials especially females to report fearlessly whenever they were sexually harassed at work.

She said it was important to reduce gender differences especially in decision making and create enabling environment to improve gender representation and governance in the Energy Sector.

At MiDA, she said, they believed women’s access to energy could improve sustainable development and increased opportunities for young women in Science, Technology, Engineering and Maths was crucial for the development of the Energy Sector.

Dr Antwi-Nsiah said MiDA organised the workshop to unearth the achievements made and challenges encountered with the increasing women’s leadership and participation in the Energy Sector.

This, she believed, would help to celebrate the successes, create awareness about the issues raised, and strengthen their commitments and actions towards increasing women’s leadership and participation.

Dr Stella Agyenim-Boateng, the Director of Human Resources (HR), Volta River Authority, said it was necessary to let women understand that they are not at offices to satisfy anyone’s sexual desires or be used as sex tools, and therefore should report such authorities whenever they encountered such micro-inequities.

She advised HR Managers to let their employees trust and have confidence in them to disclose to them such sexual misconducts.

“Our HR Managers should try to handle every report of sexual harassment with expertise by doing their own background checks well and dealing with the issue in a smart way, such that offenders would not know that they were reported,” she said.

Mrs Rosemond Asamoah Frimpong, the Manager of Gender Social Inclusion, Electricity Company of Ghana (ECG), said her company was embarking on a capacity building and educational campaign to sensitise ECG workers on sexual harassment so that they could achieve their vision of promoting zero tolerance for sexual harassment at offices.

She said there are ‘sex roles’ like giving birth which could only be done by women, however, she encouraged husbands to support their wives with ‘gender roles’ like buying groceries, helping to cater for children and cleaning the house, so that working women could have less stressful lives.

The gender roles, she said, contributed to why many women failed to take up challenging, time consuming and ambitious roles at work as they had to close early to cater for their family.

Mrs Mathilda Atswei Deisah Browne, the Principal Lands officer, Ghana Grid Company Limited, on her part, said her office had a sexual harassment policy which protected everyone from being sexually harassed.

She advised ladies to work hard to be employed based on their competency and not by favour so that they could easily resist sexual harassments at work places.