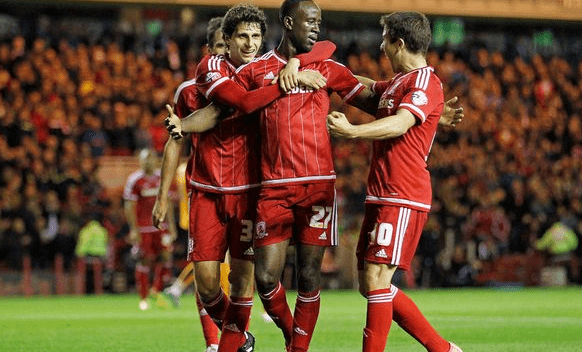 Ghana winger Albert Adomah an outstanding display by proving why he is a key player for Middlesbrough by scoring twice on Tuesday night as they easily overcame Wolves 3-0 in their Capital One Cup third-round tie at the Riverside.

Adomah was ostracised by the Middlesbrough coach at the start of the season and the Ghana showed why the manager was wrong by making it three goals in two matches since his suspension was lifted.

The home side dominated right from the start, with Adomah scoring either side of the break, in between a Diego Fabbrini strike.

Last season, the Teessiders beat Manchester City and troubled both Liverpool and Arsenal in the cup competitions, and no Premier League club will fancy taking them on in the fourth round on the evidence of their form so far this season.

Adomah narrowly failed to connect with Kike?s floated cross from the left-hand side, but when he was presented with a better opportunity eight minutes before the break the winger successfully broke the deadlock.

De Pena?s cross caused confusion in the Wolves defence, Ethan Ebanks-Landell panicked and made a hash of his attempted clearance, and Adomah gleefully swept home the loose ball from inside the penalty box.

Adomah crossed from the right-hand side, De Pena produced an excellent dummy that threw the Wolves defence, and Fabbrini swept home a crisp finish from close to the penalty spot.

George Friend?s cross from the left-hand side found Adomah in plenty of space at the back post and the winger drilled a precise finish into the corner.

It was Adomah?s third goal since he was restored to the starting line-up following a bust up with Karanka, and last month?s transfer request is now well and truly forgotten.