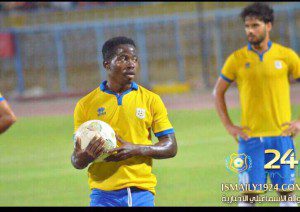 Head coach of Egyptian side Ismaily, Hossam Mido, says he expects a lot more from Torric Jebrin despite his blistering start to the season.

Torric, 25, has been the main play maker for the former African champions seeing them through two wins, a draw and a loss in their opening four matches.

But the former Egypt striker insists that there is a lot more in the midfielder that he expects to see.

In an exclusive interview with Ghanasoccernet.com, the former Tottenham Hotspurs striker noted that even though the Ghanaian has been the chief architect in midfield for his side, the boy is yet to come to his best.

Torric is a great addition to the team. He has been so brilliant with the team since the start of the season but he can do more, Mido said.

I have known him for some time so I know what he can do. He is being hailed everywhere in the Egyptian media but he can do better than he is doing, Mido added.

Torric joined Ismaily after terminating his contract with Turkish side Bussaspor and has since been magnificent for the Egyptian giants stealing the headlines on weekly basis in Cairo.